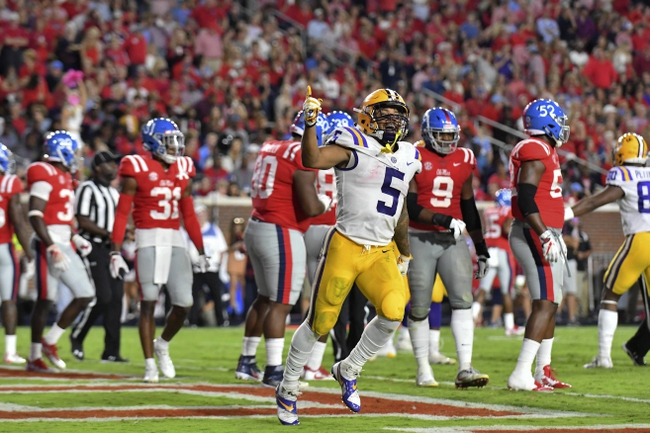 One of the marquee college football matchups on Saturday comes out of the SEC as the #19 LSU Tigers head to Bryant-Denny Stadium to take on the #1 ranked Alabama Crimson Tide.

The #19 LSU Tigers will try to build on their current 3-game winning streak following a 40-24 win over Ole Miss to improve to 6-2 this season, including a 3-1 mark in SEC play this season. Danny Etling threw for 200 yards and 2 touchdowns on 9 of 13 passing, while Derrius Guice racked up a whopping 276 rushing yards and a touchdown on 22 carries. Darrel Williams added 103 rushing yards on 22 carries while also leading the team with 105 receiving yards on 4 catches. Foster Moreau and John David Moore each caught a TD pass for the Tigers in the win. Defensively, the Tigers combined for 3 sacks and 3 INTs, giving up 347 yards of total offense and a 3 for 12 mark on 3rd down, while holding the Rebels to just over 22 minutes of possession in the win.

The Alabama Crimson Tide come into this one fresh off of their bye week and will look to remain unbeaten as the top team in the country thanks to a 45-7 whooping of Tennessee in their last game. Jalen Hurts and Tuo Tagovailoa combined for 332 passing yards, 2 touchdowns and an interception on 22 of 33 through the air. Damien Harris led the Tide with 72 rushing yards and a TD on 13 carries, while Tagovailoa added a rushing TD as well in addition to a pair of ground scores from Bo Scarbrough. Calvin Ridley led Bama's receiving corps with 8 catches for 82 yards while Irv Smith Jr. and Henry Ruggs III each contributed 60 receiving yards and a touchdown in the win. On defense, Alabama combined for 4 sacks and an interception, suffocating the Vols to the tune of just 108 yards of total offense, a 1 for 12 mark on 3rd down and just over 25 minutes of possession as the Tide rolled on to victory.

Call me crazy, I know Alabama has been stomping teams left and right in conference, but are we really going to leave 3 touchdowns on the table with one of the best ground attacks in the country? I'm not saying LSU wins this outright, but this is a lot of points to lay considering that 7 of the last 10 meetings between these two teams have been decided by 10 points or less. Give me LSU and the truckload of points here.