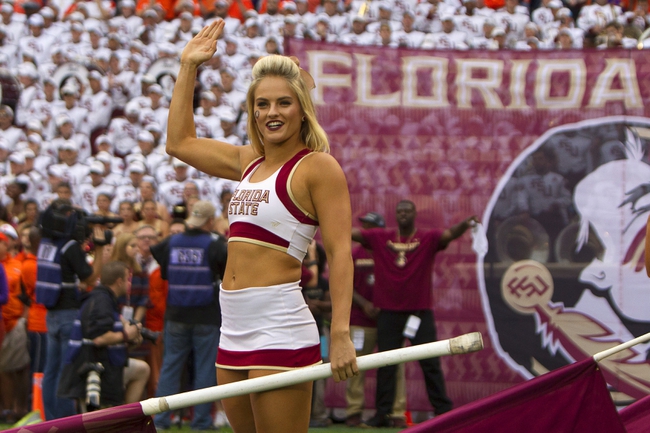 Down in Tallahassee at Doak Campbell Stadium on Saturday, the Syracuse Orange and the Florida State Seminoles will be meeting up in college football action.

The Orange come into this game with a 4-4 record. Syracuse lost two games to LSU and NC State then bounced back with two wins over Pittsburgh and Clemson before falling to Miami  in their last appearance. In that one, Syracuse QB Eric Dungey posted 137 yards and four interceptions, and Dontae Strickland led the rush on 14 carries and 105 yards.

So far this year, Dungey has 2217 yards, 12 touchdowns and eight picks while also leading Syracuse in rushing on 121 carries, 486 yards and eight touchdowns. Steve Ishmael is the top Syracuse receiver on 66 catches, 843 yards and four scores.

Over on the Florida State side, they’re sitting at 2-5 overall. The Seminoles have lost three of their last four games versus Miami, Louisville and Boston College. In that Eagles game, Florida State QB James Blackman put up 102 yards and one touchdown on 11-of-26 passing.

On the season, Blackman has 1149 yards, seven touchdowns and seven picks, and Cam Akers is the top Seminoles rusher on 105 carries, 496 yards and a TD. Auden Tate is the top Florida State receiver with 386 yards and five touchdowns on 26 receptions.

Syracuse had been playing pretty fast and loose in their two October wins, taking the victories 27-24 in each. The Orange nearly tamed the Miami beast, falling by just eight points. As for Florida State, they put up 28 points versus the Cardinals but other than that they haven’t gotten past 20 points in their last four games. All things considered here, I like Syracuse to show some dominance and cover/win.