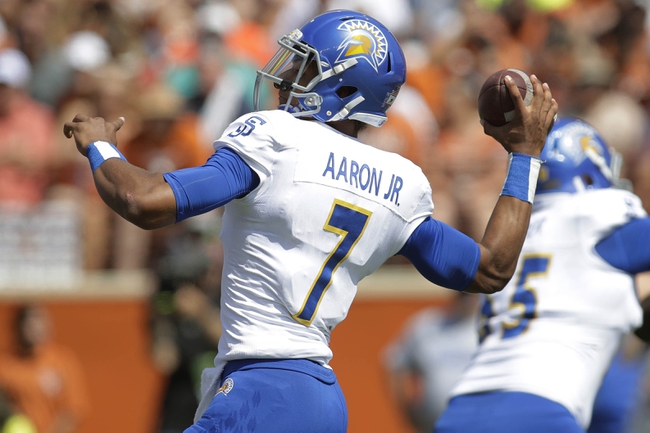 The San Diego State Aztecs look for back to back wins when the team visits the San Jose State Spartans in week ten. San Diego State rebounded from their only two losses of the year with a 28-7 victory at the Hawaii Warriors on Saturday night as a 7.5 point road favorite. The Aztecs were dominant in the box score with a 417-195 yardage advantage behind a bruising rushing attack.

SDSU quarterback Christian Chapman completed 5-11 for 83 yards with a touchdown and interception with Mikah Holder recording three catches for 55 yards and a score. Rashaad Penny was the star for San Diego State offense with 253 yards on 30 carries with scoring jaunts of one and 63 yards while Juwan Washington added 46 yards and a TD on nine totes.

The San Jose Spartans have been mired in a season  long slide with struggles in all areas. San Jose dropped number seven in a row after a 41-20 loss to the Brigham Young Cougars as a nine point home underdog. Brigham Young rolled to a 24-6 halftime lead on the way to a 598-338 yardage edge with SJSU shooting themselves in the foot with five turnovers.

Spartans quarterback Montel Aaron completed 25-39 for 198 yards with a pair of touchdowns and an interception with Tre Walker and Tre Hartley catching scoring passes. Tyler Nevens gave San Jose a viable rushing attack with 112 yard on 26 touches. The Spartans might not have won this game with zero giveaways but it would have been competitive.