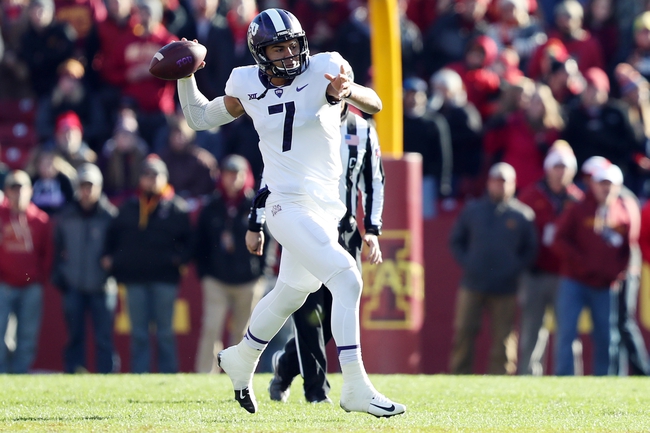 The Texas Longhorns look for a big road victory here to get a game above a .500 record. The Texas Longhorns have lost five of their last eight road games. Sam Ehlinger is completing 55.7 percent of his passes for 1,419 yards, six touchdowns and four interceptions. Ehlinger and Shane Buechele have combined for 10 touchdown passes and seven interceptions this season. Collin Johnson and Reggie Hemphill-Mapps have combined for 894 receiving yards and one touchdown while Lil'Jordan Humphrey has 22 receptions. The Texas Longhorns ground game is averaging 153.8 yards per contest, and Chris Warren III leads the way with 310 yards and five touchdowns. Defensively, Texas is allowing 21 points and 370.8 yards per game. Malik Jefferson leads the Texas Longhorns with 76 tackles, Breckyn Hager has three sacks and DeShon Elliott has six interceptions.

The TCU Horned Frogs look for their eighth victory of the season to remain in the CFB playoff conversation. The TCU Horned Frogs have split their last eight home games. Kenny Hill is completing 67.8 percent of his passes for 1,863 yards, 15 touchdowns and five interceptions. Hill has one or less touchdown passes in four of his last five games. John Diars and Jalen Reagor have combined for 675 receiving yards and six touchdowns while Desmon White has 22 receptions. The TCU Horned Frogs ground game is averaging 195 yards per contest, and Darius Anderson leads the way with 627 yards and six touchdowns. Defensively, TCU is allowing 14.8 points and 286.8 yards per game. Travin Howard leads the TCU Horned Frogs with 60 tackles, Ben Banogu has 4.5 sacks and Nick Orr has two interceptions.

Texas has done a good job of being road warriors this season, but this feels like a bad spot for the Longhorns. One, Texas has a questionable starting quarterback due to a concussion and I'm not sure this inconsistent offense is going to be able to move the ball against TCU. The Horned Frogs are also going to be a focused unit after losing last week and getting nothing from its offense. Even with a loss, TCU is still in the running for a Big 12 crown and has an outside chance of staying in the CFB playoff convo if they can run the table the rest of the way. Give me seven and a hook, I'll consider Texas, but under a full touchdown, I'll back the Horned Frogs at home.