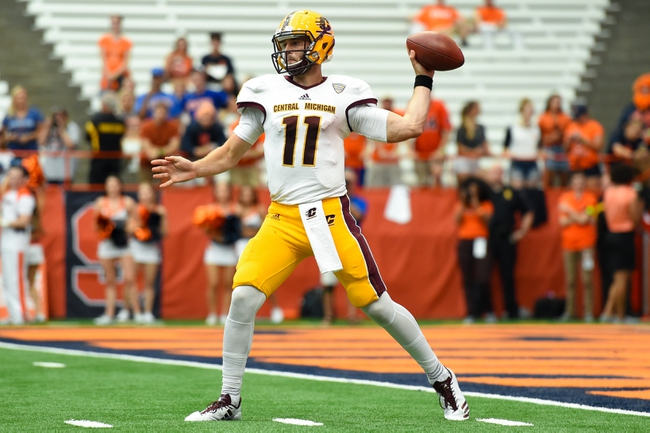 The Eastern Michigan Eagles look to keep their Bowl hopes alive when the team visits the Central Michigan Chippewas. Eastern Michigan snapped string of six straight one score defeats with a one sided 56-14 rout of the Ball State Cardinals as a 24 point home favorite. The Eagles scored early and often in rolling up a 488-326 yardage edge with the ability to both run and throw.

EMU quarterback Brogan Roback completed 15-21 for 263 yard and three touchdowns with Sergio Bailey catching a 74 yard TD and John Niupalau totaling five receptions for 91 yards and a score. Ian Eriksen topped Eastern Michigan on the ground with 114 yard and a touchdown on 21 carries followed by Shaq Vann and Blake Banham with a combined 101 yards an three touchdowns on 17 touches.

The Central Michigan Chippewas look to continue their sudden hot streak when the Eastern Michigan Eagles visit. Central Michigan defeated the Western Michigan Broncos 35-28 behind a 21-0 4th quarter run. The normally pass happy Chippewas rode a few big plays and some surprising production on the ground to a 407-357 yardage edge while posting a 4-2 turnover advantage.

Chips quarterback Shane Morris connected on just 12-30 for 243 and a pair of touchdowns but tossed a nine yard scoring toss to Eric Cooper with 5:50 left and hit Corey Willis with a 77 yard touchdown strike to win it with 2:37 remaining in the game. Jonathan Ward gave Central Michigan some punch on the ground with 130 yards on 18 touches including a 29 yard scoring run in the 4th while Morris reached the end zone on a pair of short runs.

I don’t know if there is a great deal of value with either side but I just think the Eagles are much better then their record...