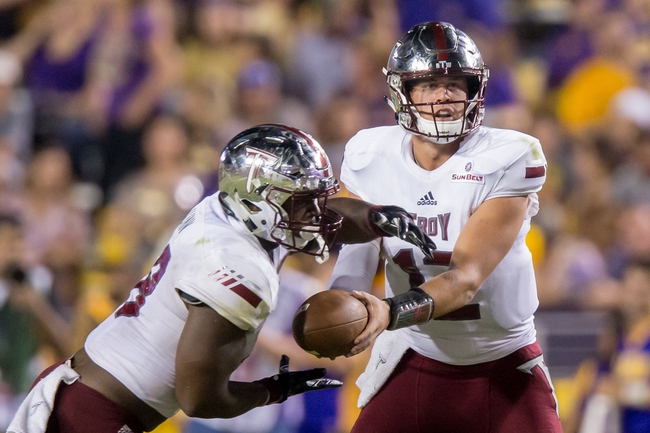 The Troy Trojans go on the road to take the field with the Coastal Carolina Chanticleers looking to stay in the Sun Belt title hunt. Troy comes off of a 24-21 victory versus the Idaho Vandals as an 18 point home favorite for win number three in a row. The Trojans were heavy favorites but barely escaped with a 395-378 yardage edge and a pair of turnovers making the offense look ordinary.

Troy quarterback Brandon Silvers completed 20-30 for 212 yards with a touchdown and interception with Damion Willis recording three receptions for 60 yards while Trevis McCormick grabbed a 14 yard scoring toss. Jordan Chunn paced the Trojans rushing attack with 113 yards and a pair of trips to the end zone on 18 carries.

The Coastal Carolina Chanticleers host the Troy Trojans looking for their second win of the season. Coastal Carolina comes off a near upset of the Arkansas Razorbacks in a 39-38 defeat as a 24.5 point road underdog. The Razorbacks easily won the yardage battle 523-359 which was negated a bit by a 31 yard fumble return for a score by the Chanticleers Nicholas Clark.

Coastal Carolina could not establish any significant threat on the ground with the twosome of  Jacqez Hairston and quarterback Kilton Anderson combining for 82 yards on 16 carries. Anderson completed 6-17 throws for 115 yards and a pair of touchdowns while Tyler Keane connected on 9-11 for 113 yards and a score before the Chanticleers lost him to an injury. Chris Jones and Malcolm Williams combining for eleven catches for 201 yards and a TD each.