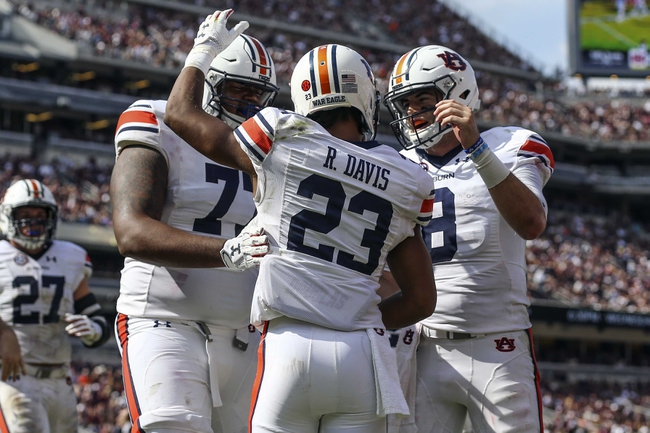 The Georgia Bulldogs look to improve to 10-0 on the season to remain the top ranked team in the country. The Georgia Bulldogs have won five straight road games. Jake Fromm is completing 63.3 percent of his passes for 1,459 yards, 15 touchdowns and four interceptions. Fromm has two or more touchdown passes in five of his last seven games. Terry Godwin and Javon Wims have combined for 797 receiving yards and nine touchdowns while Mecole Hardman has 12 receptions. The Georgia Bulldogs ground game is averaging 279.3 yards per contest, and Nick Chubb leads the way with 867 yards and nine touchdowns. Defensively, Georgia is allowing 11.7 points and 254.1 yards per game. Roquan Smith leads the Georgia Bulldogs with 70 tackles, Lorenzo Carter has four sacks and Dominick Sanders has three interceptions.

The Auburn Tigers hope to remain unbeaten at home by getting their second win of the year against a ranked team. The Auburn Tigers have won nine straight home games. Jarrett Stidham is completing 66.8 percent of his passes for 1,996 yards, 11 touchdowns and three interceptions. Stidham has two or more touchdown passes in three of his last five games. Ryan Davis and Darius Slayton have combined for 862 receiving yards and seven touchdowns while Will Hastings has 18 receptions. The Auburn Tigers ground game is averaging 236.6 yards per contest, and Kerryon Johnson leads the way with 868 yards and 15 touchdowns. Defensively, Auburn is allowing 16.9 points and 307.2 yards per game. Deshaun Davis leads the Auburn Tigers with 44 tackles, Jeff Holland has eight sacks and Daniel Thomas has one interception.

While Georgia has been getting a lot of love from the polls, Auburn has been quietly putting together a decent resume in its own right and its only two losses came against Clemson and LSU by a combined 12 points. Like Georgia's, Auburn's defense is one of the best in the country and the offense is the perfect ground game to keep the ball away from the Bulldogs. This has the feel of being a physical SEC clash, and if that's the case, I kind of want to give the edge to Auburns front seven at home. Close game that could go either way, but I'm taking my free points with the Auburn Tigers.