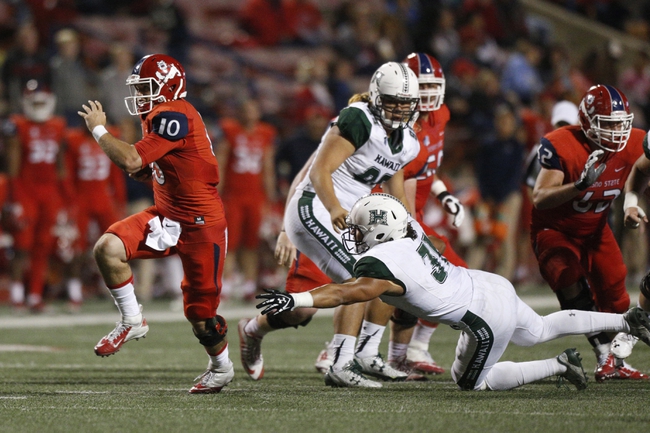 The Fresno State Bulldogs are aiming for consecutive victories when the team makes the long trip to face the Hawaii Warriors. Fresno State stayed hot with a 20-13 win versus the Brigham Young Cougars as a ten point home favorite. The Bulldogs were outgained 336-310 but played mistake free football while recovering a fumble and taking advantage of opportunities.

Fresno didn’t run the ball well with Josh Hokit leading the team with 59 yards on 13 touches while Jordan Mims totaled 54 yards on 20 carries with a pair of two yard touchdowns. Bulldogs quarterback Marcus McMaryion completed 14-20 for 174 yards with Da’Mari Scott, Jamire Jordan and KeeSean Johnson accounting for all but two catches and ten yards.

The Hawaii Warriors need to win out to become Bowl eligible and that begins with a win versus the visiting Fresno State Bulldogs. Hawaii comes in off of a 31-23 defeat at the UNLV as a touchdown road dog where a 13-7 lead went by the wayside in a 21-0 third quarter run by the Rebels. UH was barely outgained 412-400 with some consistency through the air being the major problem.

Hawaii quarterback Dru Brown connected on 24-47 for 269 yards and a touchdown with Dylan Collie recording eight receptions for 85 yards including a 20 yard scoring strike. Diocemy Sainte Juste gave the Warriors a threat on the ground with 111 yards and a two yard TD run on 20 touches. Hawaii did have a 40 yard interception return but the Rebels made a few more plays overall.