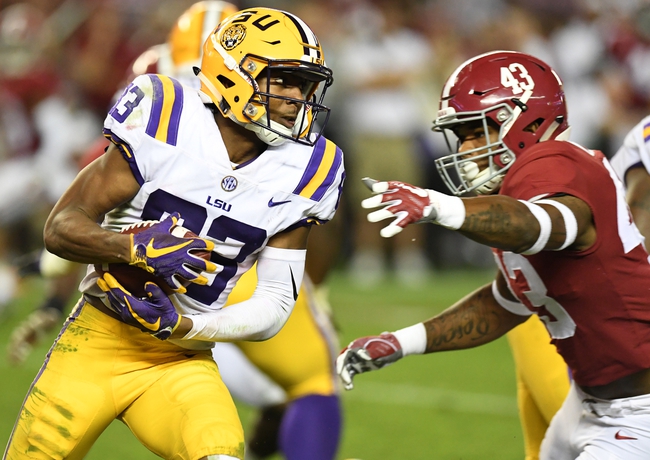 We have some SEC action on tap as the Arkansas Razorbacks duke it out with the #19 LSU Tigers in a college football matchup from Baton Rouge.

The Arkansas Razorbacks will look to climb back to .500 after improving to 4-5, narrowly escaping Coastal Carolina in their last outing by a final score of 39-38. Cole Kelley threw for 264 yards and a touchdown on 16 of 25 passing, while also rushing for one of the Hogs’ four rushing scores in the win. T.J. Hammonds led the Razorbacks’ ground attack with 7 carries for 119 yards and a touchdown, while Devwah Whaley logged 81 yards and a score of his own. Austin Cantrell added a rushing TD while Jonathan Nance led the Razorbacks with 61 receiving yards. The aforementioned Hammond’s lone reception was a 6-yard catch and run for a TD, while Jeremy Patton and Deon Stewart tied for the team-high with 3 receptions apiece. A De’Jon Harris sack was the lone individual highlight for Arkansas’ defense, as they allowed the Chanticleers to rack up 359 yards of total offense and an 8 for 15 mark on 3rd down in the game.

The #19 LSU Tigers will look to bounce back after having their three game winning streak snapped thanks to a 24-10 loss to Alabama in their last outing. Danny Etling threw for 137 yards and an interception on 12 of 26 passing, while Darrel Williams led the team with 83 rushing yards and the team’s lone touchdown on just 7 carries. Derrius Guice took his team-high 19 carries and turned them into 71 rushing yards, while DJ Chark led the team with 53 receiving yards on 3 catches. Stephen Sullivan added a pair of catches for 44 yards, while the aforementioned Guice led the Tigers with 5 catches out of the backfield for 29 yards. The Tigers combined for 4 sacks while stifling Alabama’s offense, holding the Tide to just 299 yards of total offense, howeverthe Tigers kept giving Alabama a short field on offense which ultimately led to LSU’s downfall.

Arkansas has had the bulk of the success ATS against the Tigers, especially in Baton Rouge. However, I can’t shake how bad Arkansas looked against Coastal Carolina, a team I thought the Razorbacks would handle easily. I’m worried that LSU may treat this like a throw-away game after all the preparation for Alabama, however, if the Tigers want any chance of a prime bowl game come December/January, they need to avoid spots like this, so I’ll back LSU to come out firing as more of a fade from Arkansas.