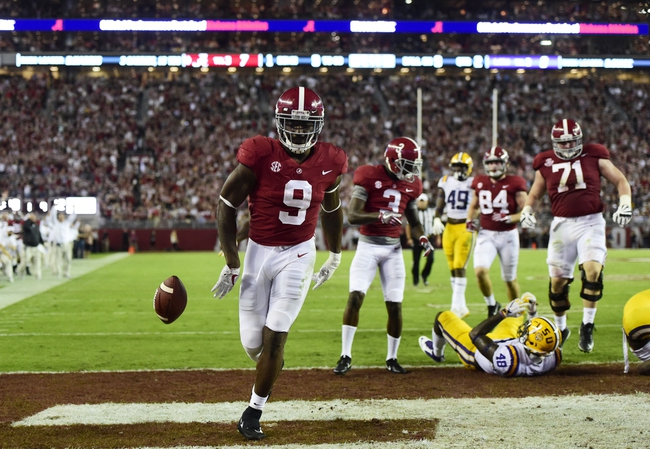 We have some SEC action on the gridiron, as the #2 Alabama Crimson Tide square off against the #16 Mississippi State Bulldogs from Starkville, MS on Saturday evening in a college football matchup.

The #2 Alabama Crimson Tide will look to stay unbeaten after a 24-10 victory over then #19 LSU by a final score of 24-10 to improve to 9-0 this season and 6-0 in SEC play. Jalen Hurts completed 11 of his 24 pass attempts for 183 yards and a touchdown through the air while also leading the tide with 44 rushing yards and a rushing TD with his 14 carries. Bo Scarbrough added 39 yards and a TD, while Damien Harris contributed 33 rushing yards in a slow night for the Alabama ground attack. Calvin Ridley led the team with 3 catches for 61 yards, while Irv Smith Jr. caught a pair of passes for 25 yards and a touchdown. The Tide combined for 6 sacks and an interception defensively, holding LSU to 306 yards of total offense and 16 first downs, despite LSU having the ball for over 34 minutes of possession in the game.

The #16 Mississippi State Bulldogs will look to keep the momentum going after winning their 4th straight game thanks to a 34-23 victory over UMASS last time out. Nick Fitzgerald threw for 139 yards and a pair of interceptions on 14 of 25 passing, but made up for it by leading the Bulldogs with 135 rushing yards and a pair of TDs, while Aeris Williams followed right behind with 114 rushing yards on 24 carries. Jesse Jackson led MSU with 4 catches for 36 yards, while Jordan Thomas, Deddrick Thomas and Reggie Todd all caught a pair of passes in the win, while Deddrick Thomas also added an 83-yard punt return TD late in the 4th to close the door on the Minutemen. Defensively, J.T. Gray opened the scoring for Mississippi State with a 58-yard pick-six, and Montez Sweat added a sack as Mississippi State held UMASS to 350 yards of total offense and a 3 for 13 mark on 3rd down with just 12 first downs in the game.

Mississippi State has looked solid over their four game winning streak, and has a blowout win over a ranked LSU team this season. However, The bulldogs have lost their last two games to top tier SEC competition in Georgia and Auburn by a combined score of 80-13. Granted, those were the last two losses before the winning streak started, but teams like BYU and UMASS aren’t Alabama, who has won the last 9 meetings between these two teams, including double-digit wins in 8 of the last 9 meetings. Alabama has their eyes set on a national playoff spot and I think they add a quality win with a cover over Mississippi State here.