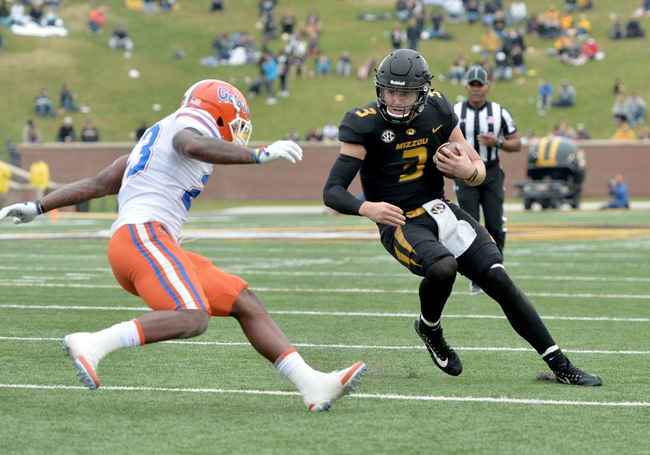 The Tennessee Volunteers and the Missouri Tigers duke it out in SEC action from Memorial Stadium in Columbia, MO on Saturday evening.

The Tennessee Volunteers will look to build some momentum after snapping a four game losing streak with a 24-10 non-conference win over Southern Miss in their last outing. Jarrett Guarantano threw for 102 yards on 9 of 13 passing, while adding a rushing score as well for the Vols. John Kelly led Tennessee with 79 rushing yards and a pair of touchdowns on his 20 carries, While Marquez Callaway led the team with 53 receiving yards. Defensively, Kyle Phillips and Darrell Taylor each logged a pair of sacks while Emmaunel Mosley added an interception and Rashaan Gaulden contributed a fumble recovery as the Vols held USM to 279 yards of total offense and a 7 for 20 mark on 3rd down in the win.

The Missouri tigers will look to get back to .500 after a 45-16 win over Florida in their last outing vaulted Mizzou to 4-5 this season while giving the Tigers their first SEC victory of the season. Drew Lock completed 15 of his 20 pass attempts for 228 yards, 3 touchdowns and an interception. Ish Witter and Larry Rountree III each put up 83 rushing yards, but it was Rountree III who contributed 3 touchdowns in the win. Emanuel Hall led Missouri’s receiving corps with 5 catches for 113 yards, while J’Mon Moore added 5 catches of his own for 64 yards and a touchdown. The aforementioned Witter, in addition to Kendall Blanton, both added touchdown grabs for the Tigers in the blowout. Defensively, Terry Beckner Jr. added a sack while Anthony Sherrils recorded a pick and a fumble recovery as the Tigers held the Gators to 349 yards of total offense.

Tennessee has done well against Missouri over the last couple of years, winning the last two meetings by double figures, including a 63-37 win over Mizzou last season. However, this is a different Vols squad, and not in a good way. Tennessee still has trouble moving the ball through the air, and Tennessee didn’t look all that great even against Southern Miss. Sure Florida is struggling, but Missouri absolutely battered the Gators last week, and are full of confidence right now, covering the spread in 5 straight, and I think they make it 6 in a row with a huge win over Tennessee here, adding to the Vols’ misery this season.