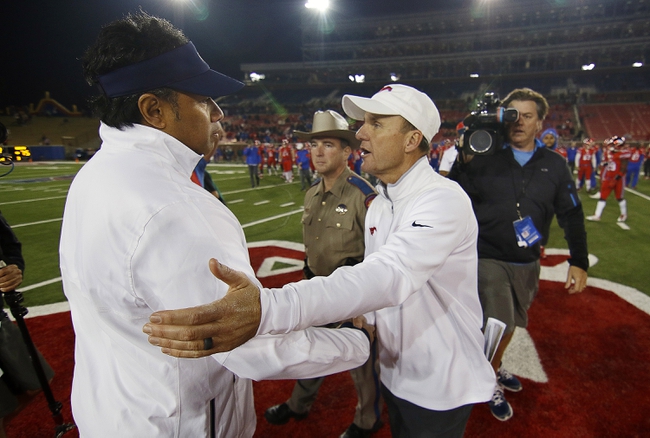 The SMU Mustangs look for their second road win of the season to get to seven wins for the first time since 2012. The SMU Mustangs have split their last six road games. Ben Hicks is completing 59.1 percent of his passes for 2,588 yards, 20 touchdowns and six interceptions. Hicks has two or more touchdown passes in 10 of his last 12 games. Trey Quinn and Courtland Sutton have combined for 1,673 receiving yards and 16 touchdowns while James Proche has 30 receptions. The SMU Mustangs ground game is averaging 189.2 yards per contest, and Xavier Jones leads the way with 700 yards and six touchdowns. Defensively, SMU is allowing 31 points and 459.1 yards per game. Mikial Onu leads the SMU Mustangs with 74 tackles, Justin Lawler has 7.5 sacks and Jordan Wyatt has three interceptions.

I can't lay chalk with Navy without knowing if Abey is going to play due to a shoulder injury. Besides, Navy hasn't looked good during it's three-game losing streak and it's fair to say the SMU Mustangs are in better form anyway. SMU has been a consistent scoring team this season and has faced some quality squads in TCU and UCF, so this is a team that's battle tested. There's also the big game with Notre Dame coming up for Navy, so there is a bit of a lookahead factor here. But when it's all said and done, I'm not laying chalk without knowing if Navy has its starting quarterback. Give me the points.