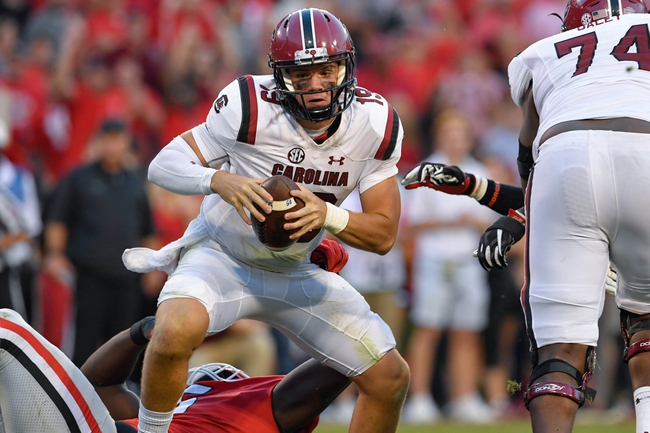 The Florida Gators and the South Carolina Gamecocks duke it out in a college football matchup in SEC action from Williams-Brice Stadium in Columbia on Saturday afternoon.

The Florida Gators will look for a confidence win to snap a 4-game losing streak after a 45-16 blowout loss to Missouri in their last outing dropped the Gators to 3-5 this season and 3-4 in SEC play in Florida’s first game since parting ways with former head coach Jim McElwain and the team’s first game under new bench boss Randy Shannon. Malik Zaire threw for 157 yards and an interception on 13 of 19 passing, while Feleipe Franks threw for 98 yards and a touchdown. Lamical Perine rushed for a team-high 66 yards, while also catching 4 passes out of the backfield for 30 yards and a touchdown. Dre Massey led the Gators with 75 receiving yards while Brandon Powell caught a team-high 5 passes for 70 yards in the losing effort. The Gators’ defense had no answer for Missouri, with a CJ Henderson interception being the lone individual highlight as Florida allowed 455 yards and 26 first downs to the Tigers in the rout.

The South Carolina Gamecocks come into this one looking to rebound after having their 3-game winning streak snapped thanks to a 24-10 loss to #1 Georgia, dropping to 6-3 this season and 4-3 in SEC play. Jake Bentley threw for 227 yards, a touchdown and a pair of interceptions on 21 of 35 passing, while the Gamecocks as a team put up 43 rushing yards on 17 carries. Hayden Hurst and Bryan Edwards tied for the team lead with 7 catches, with Hurst racking up a team-high 93 receiving yards and Edwards putting up 62 yards and a touchdown. Defensively, D.J Wonnum recorded a sack and Javon Kinlaw put up a fumble recovery as the Gamecocks couldn’t stop the Bulldogs’ ground attack, giving up 242 rushing yards and 438 yards of total offense to Georgia in the game with Georgia having a whopping 38-plus minutes of possession.

The Gators have had the majority of success ATS in this matchup. However, Florida has fallen off of a cliff, and their blowout loss to Missouri was maybe the worst performance we’ve seen out of the Gators in quite some time. South Carolina fell to Georgia, but as far as I’m concerned, there’s no shame in losing to one of the best teams in the country, and keeping the score respectable at that. I think this is a game that South Carolina takes easily so I’ll back the Gamecocks as a fade from Florida, which I have a feeling is going to be a trend from here on out this season.