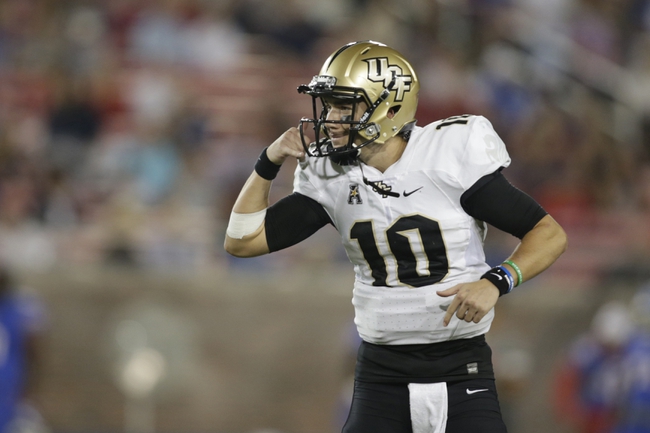 The UConn Huskies could use a win here after losing six of their last eight games to give themselves a chance at making a bowl appearance. The UConn Huskies have lost seven of their last eight road games. Bryant Shirreffs is completing 65.8 percent of his passes for 2,287 yards, 14 touchdowns and five interceptions. Shirreffs has one or less touchdown passes in four of his last five games. Hergy Mayala and Arkeel Newsome have combined for 910 receiving yards and seven touchdowns while Aaron McLean has 22 receptions. The UConn Huskies ground game is averaging 132.5 yards per contest, and Kevin Mensah leads the way with 369 yards and three touchdowns. Defensively, UConn is allowing 38.3 points and 554.3 yards per game. Junior Joseph leads the UConn Huskies with 77 tackles, Cole Ormsby has six sacks and Tyler Coyle has two interceptions.

The UCF Knights hope to improve to 9-0 on the season to remain in the drivers seat for an AAC title. The UCF Knights have won seven of their last 11 home games. McKenzie Milton is completing 70 percent of his passes for 2,409 yards, 20 touchdowns and five interceptions. Milton has two or more touchdown passes in four of his last six games. Tre'Quan Smith and Dredrick Snelson have combined for 1,043 receiving yards and 12 touchdowns while Jordan Akins has 22 receptions. The UCF Knights ground game is averaging 214.8 yards per contest, and Adrian Killins, Jr. leads the way with 575 yards and seven touchdowns. Defensively, Central Florida is allowing 20.3 points and 365.9 yards per game. Pat Jasinski leads the UCF Knights with 63 tackles, Jamiyus Pittman has two sacks and Kyle Gibson has three interceptions.

I know there's a serious talent gap and UCF has done nothing but roll this season, but this is a ton of points to lay here. UConn has hung around with decent teams this season and did beat Temple as a big underdog the last time it was on the road. UCF allowed Austin Peay to score some points and is coming off just a seven point win over SMU. I'm just not sure how motivated UCF is to stick it to UConn, as there's bigger goals out there and a date with USF is quickly approaching. It's all about being healthy for that contest. I'll take a stab with the truckload of points in this game.