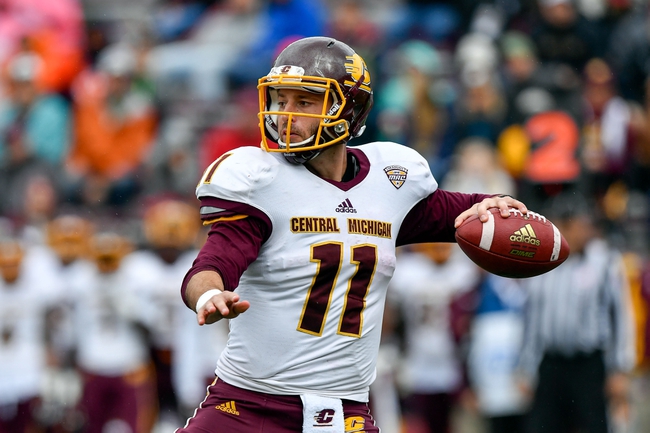 The Central Michigan Chippewas look for a road win versus the Kent State Golden Flashes in a MAC college football tussle.

The Central Michigan Chippewas look to continue their resurgence with a road trip to Kent State. Central Michigan has won three in a row after outscoring Eastern Michigan 42-30 in week eleven. Both teams finished with around 330 yards but the game was surprisingly close until Eastern Michigan quarterback Brogan Roback threw a pick six with 48 seconds left for his 5th interception of the game. The Chippewas lone fumble was return for a touchdown so mistakes were a determining factor in the outcome.

CMU quarterback Shane Morris completed 11-18 for 155 yards and three touchdowns with Corey Willis recording six catches for 71 yards and a pair of scores while Tyler Conklin caught a four yard TD pass. Jonathan Ward paced Central Michigan on the ground with 159 yards on 19 carries for 159 yards with two yard and 79 yard touchdown runs.

The Kent State Golden Flashes shoot for their third win of the season when the Central Michigan Chippewas pay a visit. Kent State comes off a 48-20 defeat at the Western Michigan Broncos as a three touchdown underdog that saddled the team with their third straight defeat. This was not easy on the eyes as Kent allowed 389 yards and totaled a mere 281 yards with four giveaways with three ending up in their own end zone.

I think Central Michigan doesn’t want to mess around and plays with a purpose here. I don’t like the chalk but for me it’s Chippewas or walk away…