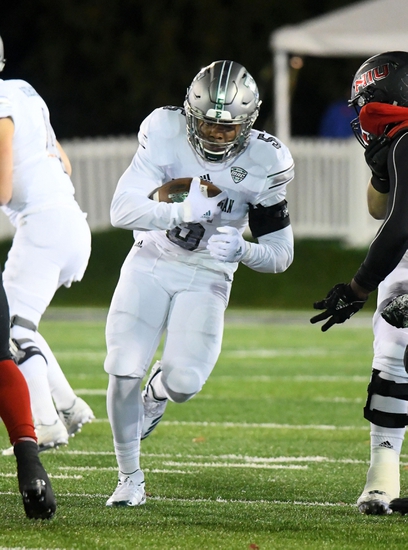 The Eastern Michigan Eagles go on the road to tangle with the Miami (Ohio) Redhawks in week 12 college football.

The Eastern Michigan Eagles look to end the Bowl hopes of the Miami (Ohio) Redhawks with a road win in week 12. Eastern Michigan saw their own Bowl hopes come to an end in a 42-30 defeat at the Central Michigan Chippewas. Central Michigan held a slight 332-328 yardage edge but neither dominated any one area with the decisive difference being the Eagles five turnovers. Shaq Vann was the top EMU threat on the ground with 71 yards and a touchdown on 14 carries while Ian Eriksen logged 52 yards on 14 touches.

The Eagles really had problems throwing the ball with quarterback Brogan Roback connecting 23-39 for 204 yards with two touchdowns and five interceptions including a pick six with 48 seconds remaining. The Eagles defense played reasonably well with a fumble return for a score but could not survive all the mistakes on the offensive side of the football.

The Miami (Ohio) Redhawks look to save Bowl eligibility when the Eastern Michigan Eagles take the field. Miami (Ohio) improved to 4-6 on the season with a 24-14 victory over the shorthanded Akron Zips. The Redhawks enjoyed a 420-273 yardage edge but were hurt with a pair of turnovers although Akron quarterback Thomas Woodson was suspended which greatly hurt the pass happy Zips. Kenny Young gave Miami (Oh) some valuable production on the ground with 100 yards on 14 carries with Alonzo Smith adding 51 yards on 13 attempts.

Redhawks quarterback Gus Ragland returned from injury to complete 19-32 for 244 yards and three touchdowns along with a pair of interceptions with Akron returning a pick for 41 yards. Young was a solid receiver out of the backfield for the Redhawks with 98 yards on nine receptions including a 30 yard TD catch.

Miami (OH) still can finish the season Bowl eligible so there is something to play for. I believe Eastern Michigan would like nothing better then to finish the season strong and end the Redhawks postseason hopes. If you like Miami (OH) bet them now or wait for more points on EMU…