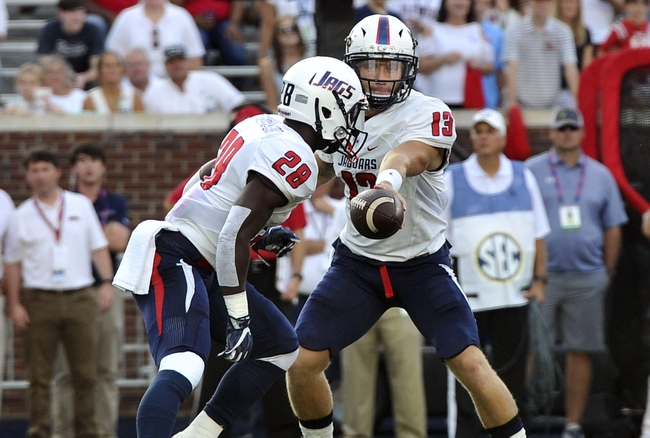 We have some Sun Belt conference action on the gridiron as the South Alabama Jaguars face off against the Georgia Southern Eagles in a college football matchup.

The South Alabama Jaguars come into this one looking to build some momentum after snapping a mini 2 game losing streak with a 24-19 win over Arkansas State in their last outing. Cole Garvin threw for 343 yards and a pair of touchdowns on 25 of 45 passing, while Tra Minter added a rushing TD of his own for the Jags in the win. Jordan McCray led the team with 4 catches for 72 yards while Jamarius Way racked up 66 yards on 3 receptions. Malik Stanley led the team with 6 catches for 60 yards, while Sam Harris and Kawaan Baker each added a receiving touchdown in the win for South Alabama. Defensively, the Jaguars put up 4 sacks to match their 4 interceptions, all while holding Arkansas State to 365 yards of total offense and a 6 for 15 mark on 3rd down in the win.

The Georgia Southern Eagles will still be looking for their first win of the season after dropping to 0-9 with a 27-6 loss to Appalachian State. Shai Werts and Kado Brown combined to throw for 80 yards on 10 of 17 passing, while Wesley Fields led the Eagles in rushing with 37 yards on 8 carries. The aforementioned Werts added 34 yards on 17 carries, while Malik Henry led the Eagles receiving corps with 4 catches for 45 yards in the losing effort. Defensively, the Eagles gave up 417 yards of total offense to App State in the loss.

What this boils down to for me is simply the fact that Georgia Southern has shown us nothing to give us any confidence that they’d be able to get a cover let alone a win at home here. South Alabama has the weapons to put points on the board, something that the Eagles have lacked to this point this season, so I’ll lay the points with the Jaguars here.