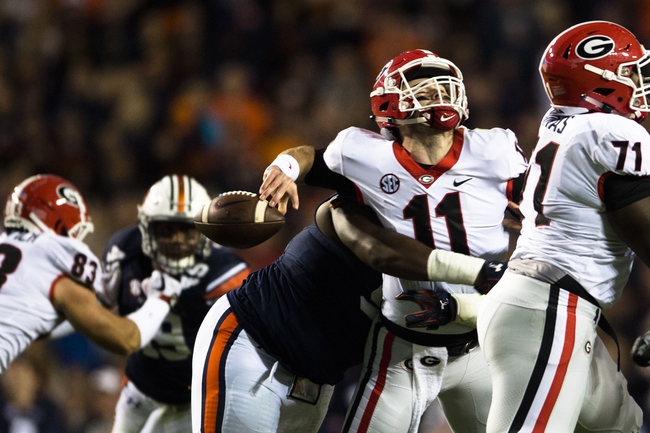 We have some SEC action on the gridiron, as the Kentucky Wildcats and the Georgia Bulldogs duke it out from Athens on Saturday afternoon.

The Kentucky Wildcats will try to build some momentum after taking down Vanderbilt by a final score of 44-21 to improve to 7-3 this season. Stephen Johnson threw for 195 yards on 13 of 17 passing, while Benny Snell Jr rushed for 116 yards and 3 touchdowns on 17 carries, while Sihiem King took his 15 carries and turned them into 69 yards and a pair of touchdowns. Lynn Bowden led the Wildcats with 79 receiving yards, while Garrett Johnson caught a team-high 6 passes for 76 yards in the win. Defensively, it was a field day for Kentucky, combining for 5 sacks and 4 interceptions, all while holding Vanderbilt to 368 yards of total offense in the win.

The Georgia Bulldogs will be looking to rebound from their first loss of the season after a 40-17 dismantling at the hands of Auburn in their last outing. Jake Fromm completed 13 of his 28 pass attempts for 184 yards and a touchdown while Nick Chubb rushed for a team-high 27 yards and a touchdown on 11 carries and Sony Michel put up 21 rushing yards on 9 carries. Javon Wims led the team with 96 receiving yards on 3 catches, while Terry Godwin put up a team-high 4 catches for 54 yards and Riley Ridley added a touchdown grab for the Dawgs. Defensively, Georgia combined for a pair of sacks but ultimately had no answer for Auburn as they gave up 488 yards of total offense to the Tigers in the loss.

I know Georgia is going to come out angry after being humiliated in the national spotlight in a game they needed to win. However, I think this line is a bit much considering Kentucky has been no slouch this season, and has the horses offensively to at least keep up with Georgia and keep this one respectable. I’m not coming out and saying that Kentucky wins this outright, but three touchdowns is more than reasonable all things considered, so I’ll back Kentucky here.