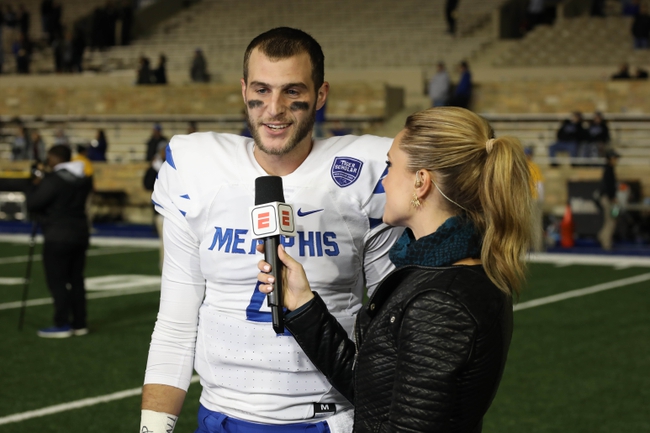 The SMU Mustangs look for a victory here after splitting their last eight games to win seven games for the first time since 2012. The SMU Mustangs have lost six of their last nine road games. Ben Hicks is completing 58.8 percent of his passes for 2,849 yards, 24 touchdowns and seven interceptions. Hicks has two or more touchdown passes in 11 of his last 13 games. Trey Quinn and Courtland Sutton have combined for 1,883 receiving yards and 19 touchdowns while James Proche has 33 receptions. The SMU Mustangs ground game is averaging 186.8 yards per contest, and Xavier Jones leads the way with 806 yards and seven touchdowns. Defensively, SMU is allowing 32.2 points and 469.1 yards per game. Mikial Onu leads the SMU Mustangs with 77 tackles, Justin Lawler has 7.5 sacks and Jordan Wyatt has three interceptions.

The Memphis Tigers hope to build on their five-game winning streak to inch closer to the AAC title game. The Memphis Tigers have won six straight home games. Riley Ferguson is completing 60.7 percent of his passes for 2,881 yards, 27 touchdowns and seven interceptions. Ferguson has three or more touchdown passes in four of his last five games. Anthony Miller and Tony Pollard have combined for 1,299 receiving yards and 14 touchdowns while Phil Mayhue has 28 receptions. The Memphis Tigers ground game is averaging 173.4 yards per contest, and Darrell Henderson leads the way with 776 yards and four touchdowns. Defensively, Memphis is allowing 31.2 points and 449.6 yards per game. Austin Hall leads the Memphis Tigers with 66 tackles, Genard Avery has 5.5 sacks and Terrell Carter has four interceptions.

SMU has been getting blasted on the defensive end as of late and has been poor when playing on the road this season. SMU has also allowed 28 or more points in six straight games, something you don't want to see when going up against an offensive powerhouse in Memphis. The Tigers are inching closer and closer to having a shot to win an AAC crown, and while the offense continues to produce, you have to like Memphis' defensive effort. Memphis was once one of the worst defensive teams in the country, but its allowed just 40 points in its last two games combined. That's progress. I like what I'm seeing from the Memphis Tigers, so I'll pick them to win by double digits.