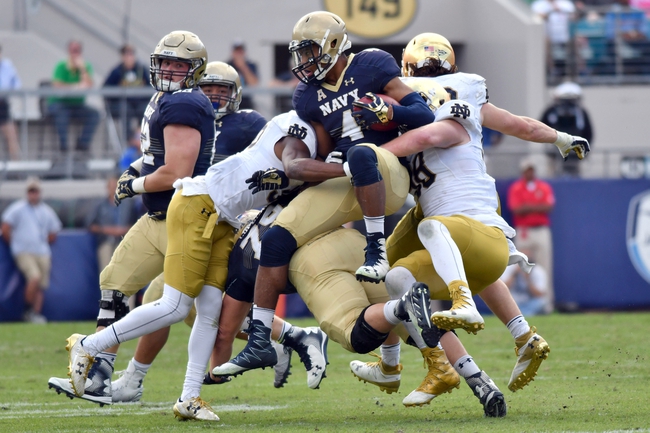 The Navy Midshipmen are aiming for the huge upset of the Notre Dame Fighting Irish on Saturday. Navy defeated the Southern Methodist Mustangs 43-40 in week eleven to end a two game skid as a field goal home favorite. The Midshipmen have been battling inconsistency which reared it’s head for the third straight game with a 34-11 lead at the half disappearing.

Navy won the yardage battle 559-426 with every yard coming on the ground . Middies quarterback Malcolm Perry threw exactly one pass and it was intercepted but Perry was a monster on the ground with 282 yards on 33 touches with four touchdowns. Anthony Gargiulo racked up 145 yards on 15 touches and a TD but Navy did their damage in the first half and the Mustangs in the second half.

The Notre Dame Fighting Irish welcome the Navy Midshipmen to town in their annual rivalry. Notre Dame had been creeping up the rankings until struggling on both sides of the football in a 41-8 defeat at the Miami Hurricanes as a 3.5 point road favorite. The Fighting Irish trailed 27-0 heading to the intermission and never recovered with mistakes doing too much damage. The Irish were outgained 374-261 and committed four turnovers which led to a Hurricanes scoring spree.

The Irish had virtually zero ground game with Josh Adams totaling 40 yards on 16 carries. Notre Dame quarterback Brandon Wimbush completed 10-21 for 119 yards and a touchdown along with a pair of interceptions including a 65 yard pick six. Ian Book hit 3-6 throws for 33 yards and another interception so nothing the Fighting Irish did was successful.