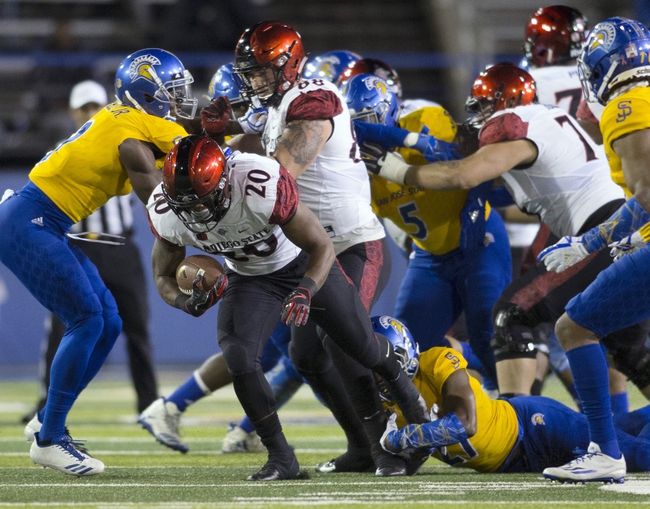 The Nevada Wolf Pack are gunning for consecutive victories when the team visits the San Diego State Aztecs on Saturday. Nevada ended a three game skid with a one sided 59-14 win versus the San Jose State Spartans as a 17 point home favorite. Nevada jumped to a 38-7 lead at the half and never let up.

The Wolf Pack outgained the Spartans 441-302 and played mistake free football while recovering two fumbles and intercepting three passes by Dameon Barber with pick six’s of 39 and 100 yards. Nevada quarterback Ty Gangi completed 16-23 for 232 yards and three touchdowns with Wyatt Demps recording seven receptions for 115 yards and a pair of scores. Kelton Moore led the Wolf Pack on the ground with 79 yards on 20 carries while Blake Wright added 57 yards on six totes and a touchdown.

The San Diego State Aztecs come out of their bye week to entertain the Nevada Wolf Pack on Saturday. San Diego State has won consecutive contests following a 52-7 rout of the San Jose State Spartans. This was all Aztecs with the defense limiting the Spartans to just 200 yards with a fumble recovery and a pair of interceptions. The SDSU offense amassed 648 yards behind a bruising rushing attack that totaled 554 yards and averaged 7.8 yards per attempt.

San Diego State quarterback Christian Chapman completed 4-5 for 77 yards with an eight yard scoring toss to Nick Bawden. Rashaad Penny paced the Aztecs on the ground with 234 yards on 20 touches with touchdowns of 13, 64 and 82 yards while Juwan Washington totaled 134 yards on 16 carries and another two touchdowns.