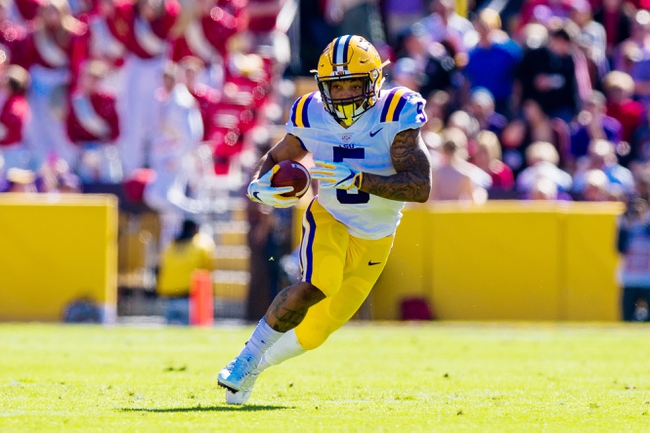 We have some SEC action on the gridiron as the LSU Tigers take on the Tennessee Volunteers in a college football matchup from Knoxville on Saturday evening.

The LSU Tigers will look to pick up another win after taking down Arkansas by a final score of 33-10 in their last outing to improve to 7-3 this season. Danny Etling threw for 217 yards and a pair of touchdowns on 11 of 16 passing, while Derrius Guice rushed for 147 yards and 3 touchdowns on 21 carries. DJ Chark led LSU with 4 catches for 130 yards and both of the Tigers’ receiving touchdowns in the win. Stephen Sullivan added a pair of catches for 40 yards, while Derrick Dillon added a pair of catches of his own. Defensively, LSU combined for a sack and an interception, all while holding Arkansas to 318 yards of total offense and a 5 for 15 mark on 3rd down in the win.

The Tennessee Volunteers will be looking for a win after being routed by Missouri in their last outing by a final score of 50-17. Will McBride threw for 139 yards, a touchdown and 2 interceptions on 16 of 32 passing, while also leading the team with 63 rushing yards on 14 carries. Ethan Wolf and Brandon Johnson each had 3 receptions for 45 yards, with the only difference being Wolf’s 19-yard touchdown grab. John Kelly added a team-high 6 receptions for 13 yards out of the backfield. An Alexis Johnson sack and a Nigel Warrior pick-six were the lone highlights for Tennessee defensively as the Vols gave up a whopping 659 yards of total offense, including 433 yards on the ground.

Even with the Vols showing some signs of life with McBride at QB, I still don’t feel comfortable backing Tennessee in any capacity as the defense can’t keep points off of the board. Missouri ran circles around the Vols and LSU has the potential to do the same with Guice in the backfield, so I’ll lay the points with LSU considering they’ve had success against the spread in Tennessee.