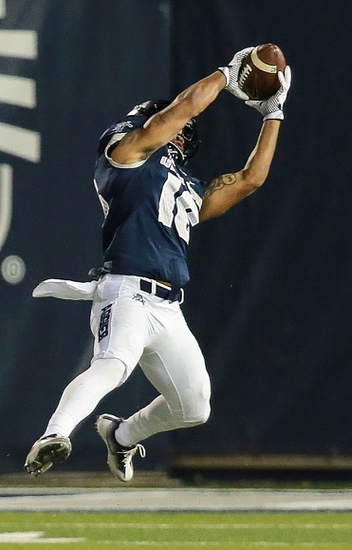 Week 12 college football features a matchup between the Utah State Aggies and the Hawaii Warriors.

The Hawaii Warriors are looking for their third win of the season with a trip to the Utah State Aggies on Saturday. Hawaii has lost three in a row after falling to the Fresno State Bulldogs 31-21 as a 9.5 point home dog. UH trailed 31-7 before a 4th quarter rally fell short as the offense was bottled up for most of the game with 274 yards and a pair of turnovers.

Fresno State totaled 403 yards with some balance with two interceptions so Hawaii wasn’t completely horrible on the defensive side of the football with a pick six. Warriors quarterback Dru Brown struggled to stretch the field on an 18-31 effort for 154 yards and two touchdowns and an interception with Kumoku Noa and Dylan Collie catching TD’s. Diocemy Saint Juste gave the Warriors a viable rushing attack with 104 yards on 22 carries.

The Utah State Aggies have their sights set on Bowl eligibility when the Hawaii Warriors visit on Saturday night. Utah State evened their record at 5-5 following a 24-10 win at the New Mexico Lobos as a field goal underdog heading in to their bye week. The Aggies did not move the ball well with a mere 243 yards and less then 21 minutes of possession but the defense gave up 340 yards and recovered four fumbles to give the offense superior field position.

LaJuan Hunt was the face of the Utah State rushing attack with 117 yards on 14 carries with one yard and 65 yard scoring jaunts. Aggies quarterback Jordan Love completed 13-24 for 114 yards and an interception with Ron’Quavion Tarver catching two throws for 40 yards. David Woodward returned a fumble 70 yards for Utah State for a 24-3 lead that secured the win.

I don’t think Hawaii is a complete pushover but Utah State has to win or their season is over. That should be enough motivation…