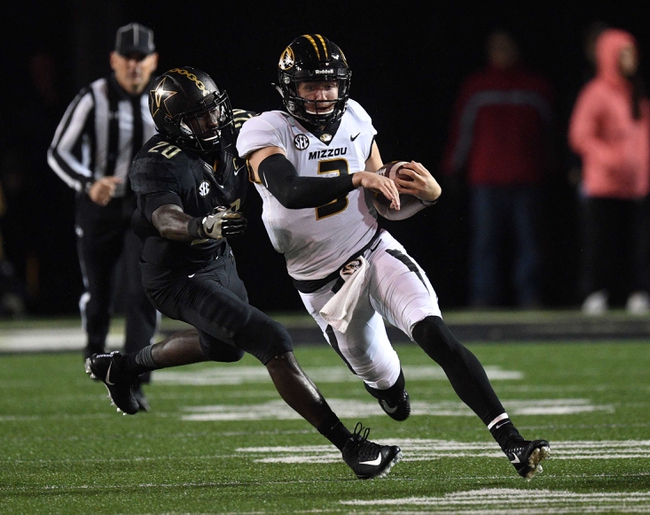 We have some SEC action on the gridiron on Friday, as the Missouri Tigers take on the Arkansas Razorbacks in a college football matchup.

The Missouri Tigers will look to cap off their season and add to their current 5 game winning streak, sitting at 6-5 on the year following their 45-17 win over Vanderbilt last time out. Drew Lock completed just 10 of his 25 pass attempts, but racked up 235 yards and 3 touchdowns. Ish Witter led the team with 102 rushing yards on 16 carries, while Larry Rountree III put up 53 yards and a touchdown with his 15 carries. Albert Okwuegbunam led the Tigers with 5 catches for 116 yards and 2 TDs, while J’Mon Moore chipped in 3 receptions and Richaud Floyd added a 30-yard touchdown catch with his lone reception. Defense and special teams played an important role in the win, with the aforementioned Floyd adding a 74-yard punt return for a score, while Brandon Lee returned one of Mizzou’s 3 interceptions 42 yards for a touchdown. The Tigers also combined for a pair of sacks, all while giving up 399 yards of total offense and a 5 for 16 mark on 3rd down to Vandy in the win.

The Arkansas Razorbacks will try to finish their season on a high note after back-to-back losses dropped Arkansas to 4-7 with a 28-21 loss to Mississippi State last time out. Austin Allen completed 12 of 18 passes for 124 yards, while David Williams led Arkansas with 75 yards and a touchdown with his 8 carries. Devwah Whaley also chipped in 21 rushing yards and a TD with his team-high 12 carries, while Deon Stewart led the team with 39 receiving yards. The Razorbacks combined for a pair of sacks and a forced fumble that Briston Guidry recovered in the endzone for the 3rd Razorbacks touchdown in the loss. All of this while giving up 348 yards of total offense to the Bulldogs in the losing effort.

The home team has had all of the success as of late in this matchup, but this is a game where I think the trends get bucked. Missouri has been absolute money ATS over the last couple of months and will be looking to improve their bowl position. Arkansas is just waiting for the season to come to an end and even with this being the final game of the year, I think it’s all for naught as the Tigers end this one with a bang.