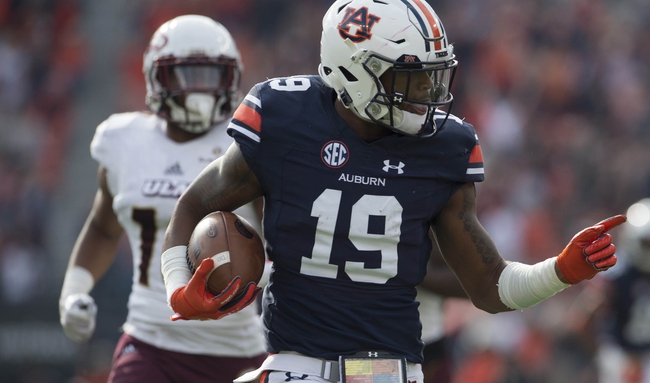 The marquee matchup of the college football weekend pits the #1 Alabama Crimson Tide against the #6 Auburn Tigers in another installment of the Iron Bowl from Jordan-Hare Stadium in Auburn, AL.

The #1 Alabama Crimson Tide will look to remain unbeaten and stay atop the college football playoff rankings after climbing to 11-0 with a win over Mercer in their last outing. Jalen Hurts completed all 7 of his pass attempts for 180 yards and 3 touchdowns while Tua Tagovailoa threw for 3 TDs of his own on 7 of 11 passing. Bo Scarbrough led the team with 54 rushing yards on 5 carries, while Brian Robinson Jr. added 50 yards and a touchdown on the ground and Najee Harris added a rushing score of his own in the rout. Calvin Ridley led the team with 3 catches for 103 yards and a touchdown, while Josh Jacobs added a pair of catches for 45 yards and a touchdown. Cam Sims, Derek Kief, Irv Smith Jr. and Hale Hentges each had a touchdown grab in the win for the Tide. Defensively, Alabama combined for 3 interceptions while holding Mercer to a 5 for 16 mark on 3rd down and 161 yards of total offense in the game.

The #6 Auburn Tigers will try to pull off a victory to leapfrog the Tide and book a spot in the SEC championship after climbing to 9-2 on the year with a 42-14 win over Louisiana-Monroe in their last outing. Jarrett Stidham threw for 235 yards, 2 touchdowns and an interception on 18 of 24 passing, while Kerryon Johnson led the team with 137 rushing yards and a touchdown. Kam Martin also chipped in 83 rushing yards and a TD, while Malik Miller added a rushing score of his own in the win. Darius Slayton led the team with 89 receiving yards and a touchdown, while Ryan Davis added a team-high 6 grabs for 48 yards and the aforementioned Martin’s lone catch went 41 yards for a touchdown in the winning effort. Defensively, Auburn combined for a pair of sacks, a forced fumble which they also recovered and a pair of interceptions, including a 45-yard pick-six from Nick Ruffin, all while holding ULM to an 8 for 20 mark on 3rd down and 333 yards of total offense in the Auburn victory.

As much as I’m hoping for a competitive game in this one, the fact of the matter is that Alabama has won 5 of the last 6 meetings between these two teams by double digits. Bama just seems focused on staying in the top 4, and while an Auburn victory would probably give them a good chance at making the playoffs, I can’t see Alabama slipping up here. It will be a good game, but ultimately I see Alabama being too much and ending up with a win here.