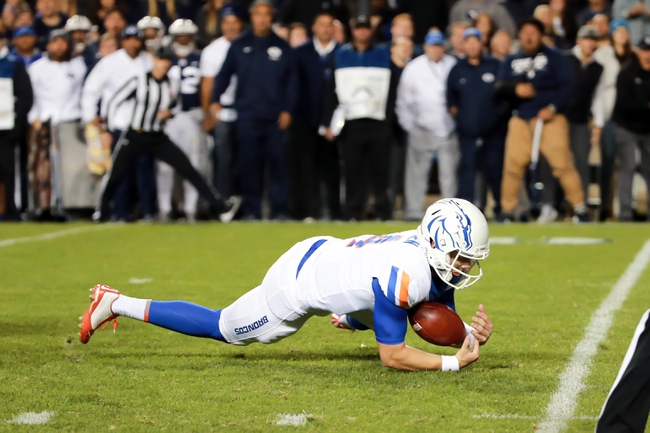 The Boise State Broncos have been red hot and have been looking like the team that was always a threat on the national level. Boise State has won seven straight following a 44-19 victory versus the Air Force Falcons as a 17 point home favorite. The Broncos owned total yardage 428-296 and played mistake free football while recovering three fumbles with one converted for a touchdown.

The Broncos did not do anything on the ground with just 90 yards and a three yard average but the passing game picked up the slack. Broncos quarterback Brett Rypien connected on 16-22 for 300 yards and three touchdowns with AJ Richardson and Cedrick Wilson combining for eight receptions for 230 yards with Richardson catching an 87 yard scoring strike.

The Fresno State Bulldogs don’t possess a huge offense yet they have been the definition of consistency with wins in seven of eight behind a stellar defense and an offense that simply gets the job done without a lot of flash. The Bulldogs come off a rugged 13-7 victory at the Wyoming Cowboys as a field goal road favorite with a slight 333-308 yardage advantage and a 2-1 edge in turnovers.

Fresno State was unable to establish the run with six players getting 45 carries for a grand total of 147 yards and just over three yards per attempt. Bulldogs quarterback Marcus McMaryion did have some success on 14-23 for 186 yards wit a 21 yard touchdown throw to Ronnie Rivers that gave Fresno State a 13-0 lead which was all the defensive side of the football needed.

These are the best teams in the Mountain West and while Fresno State primarily relies on defense, the Broncos are capable on both sides of the football…