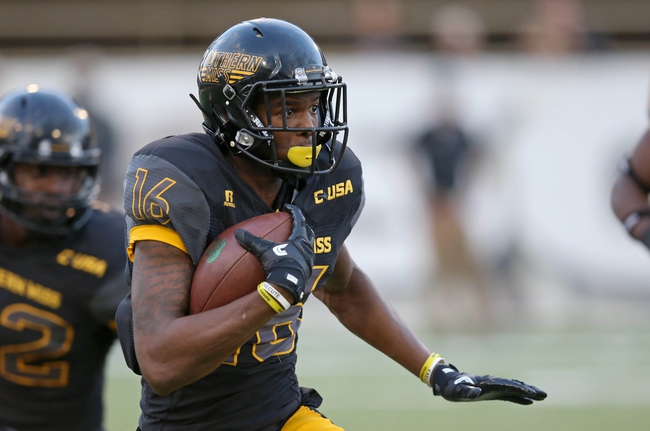 Coming up on Saturday from Joan C. Edwards Stadium, the Southern Miss Golden Eagles and the Marshall Thundering Herd will be meeting up in college football action.

Southern Mississippi comes into this game with a 7-4 record so far, losing to UAB and Tennessee before bouncing back with wins in their last two games over Rice and Charlotte. In that Charlotte game, Eagles RB Ito Smith had 153 yards and three scores.

On the season so far, Kwadra Griggs leads Southern Miss with 1623 yards, 12 TDs and two picks, and Smith heads up the rushing attack with 1171 yards and 12 TDs from 203 carries. Korey Robertson is the top Eagles receiver on 952 yards and 10 touchdowns.

Over on the Marshall side, they’re currently 7-4 as well. The Herd have lost three of their last four games versus FIU, FAU and UTSA. In that UTSA game, Marshall QB Chase Litton managed 189 yards with a TD and an INT.

This year, Litton has logged 2545 yards with 19 TDs and 11 picks, while Tyler King leads the Marshall rush with 666 yards and six touchdowns. Leading the Herd receivers is Tyre Brady with 777 yards, seven touchdowns and 56 receptions.

Southern Mississippi has made quite a turnaround following their two recent losses, in which they gave up 64 points and scored just 22. The Eagles have put up 109 points in their last two games, which is a good sign moving forward. Marshall, meanwhile, couldn’t do much of anything against UTSA, and ended up losing 9-7. I’m not terribly confident in Marshall right now, so I’m taking Southern Mississippi to cover here.