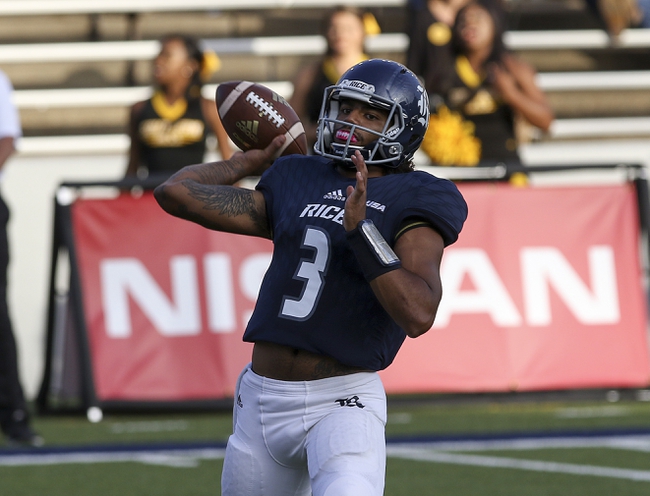 Over at Rice Stadium on Saturday, the North Texas Mean Green will be meeting up with the Rice Owls in college football action.

North Texas enters this game with an 8-3 record so far. The Mean Green have won their last four games versus Old Dominion, LA Tech, UTEP and Army. In that Army game, North Texas QB Mason Fine put up 386 yards with four touchdowns and a pick.

So far this year, Fine has 3198 yards with 26 TDs and 10 INTs, while Jeffery Wilson leads North Texas in rushing with 1215 yards and 16 TDs. Tops in receiving for the Mean Green is Jalen Guyton, with 758 yards and nine TDs off 47 catches.

Over on the Rice side, they’re currently 1-10 on the year. The Owls have lost to LA Tech, UAB, Southern Miss and Old Dominion in their last four. In that Monarchs game, Rice’s Miklo Smalls put up 90 yards passing with an INT and led the rush on 84 yards and a score.

On the season, Smalls has 516 yards with one TD and four picks, and Nahshon Ellerbe is the leading Rice rusher with 405 yards and six touchdowns. Heading up the Owls’ receiving corps is Aaron Cephus, with 572 yards and five touchdowns.

North Texas has been rolling over the past month or so, but they are giving up quite a bit of points despite their wins. The Mean Green have surrendered a combined 120 points over their last four games. The good news for them is that Rice doesn’t do a whole lot of things well, but that said the Owls have put up at lest 21 points in each of their last four. Still, I like North Texas to get a cover here.