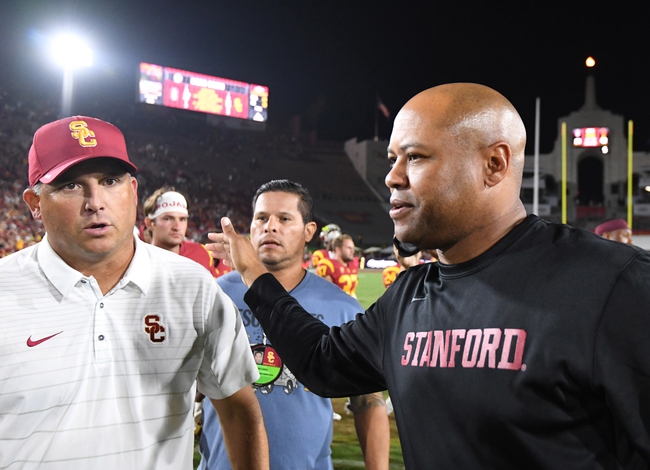 The USC Trojans look for a fifth straight victory to win their 39th conference title in school history. The USC Trojans have won seven of their last nine non-home games. Sam Darnold is completing 63.3 percent of his passes for 3,462 yards, 24 touchdowns and 12 interceptions. Darnold has two or more touchdown passes in nine of his last 11 games. Deontay Burnett and Tyler Vaughns have combined for 1,630 receiving yards and 13 touchdowns while Steven Mitchell Jr. has 39 receptions. The USC Trojans ground game is averaging 196.5 yards per contest, and Ronald Jones II leads the way with 1,346 yards and 16 touchdowns. Defensively, USC is allowing 26.2 points and 409.9 yards per game. Cameron Smith leads the USC Trojans with 95 tackles, Rasheem Green has eight sacks and Jack Jones has four interceptions.

Stanford is a tough team that is well coached, physical and plays hard, so there's always value with the points and the Cardinal. But there's a lot of things working against Stanford here. Stanford is coming off a hard fought win over Notre Dame last week and has to play on six days rest while USC hasn't played since November 18. Bryce Love, who is the heart of Stanford's offense, is still battling injury issues, and you have to wonder just how effective he'll be dinged up against an athletic USC defense. The Trojans can also ask less of Darnold with Ronald Jones II enjoying his best stretch of his career that includes eight rushing touchdowns in his last four games. There's also no overlooking the Trojans beatdown over Stanford earlier in the season in which they produced over 600 yards of offense and scored 14 points in three of the four quarters. USC is simply the deeper, more talented football team and as long as it limits the turnovers and plays clean football, this should be a comfortable victory for USC.