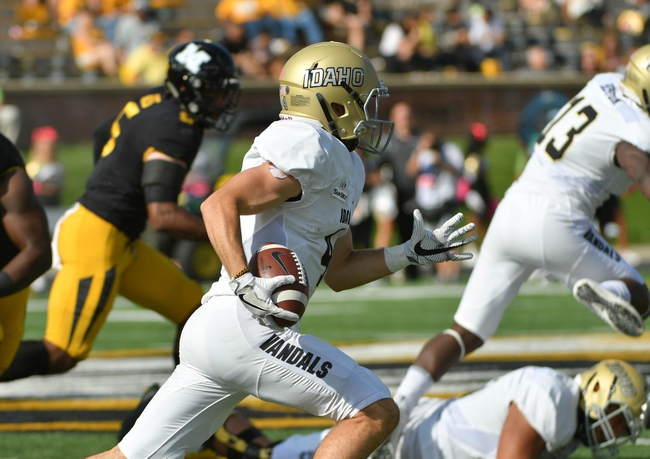 We have some Sun Belt conference action on the gridiron Saturday, as the Idaho Vandals take on the Georgia State Panthers in a college football matchup.

The Idaho Vandals will try to finish the year on a high note after dropping their last 3 games, including a 17-10 loss to New Mexico State in their last outing to fall to 3-8 this season. Colton Richardson threw for 167 yards, a touchdown and an interception on 18 of 33 passing, while Aaron Duckworth led the Vandals ground attack with 13 carries for 39 yards. Alfonso Onunwor led Idaho with 6 catches for 63 yards, while David Ungerer added 6 catches of his own for 57 yards and Idaho’s lone touchdown in the loss. Defensively, Idaho combined for a pair of sacks and an interception all while giving up 402 yards of total offense and an 11 for 22 mark on 3rd down to the Aggies in the loss.

The Georgia State Panthers will look to improve their bowl projections after being pretty much eliminated from the Sun Belt championship race following their 31-10 loss to Appalachian State in their last outing. Conner Manning threw for 201 yards and an interception while also rushing for the team’s lone touchdown in the loss. Tra Barnett led Georgia State’s ground attack with 9 caries for 42 yards while Glenn Smith racked up 38 rushing yards and a fumble on 13 carries. Penny Hart led the Panthers’ receiving corps with 5 catches for 61 yards, while Jonathan Ifedi and the aforementioned Smith each caught 3 passes in the losing effort. The Panthers’ secondary combined for a pair of interceptions as the lone individual highlight for Georgia State as GSU gave up 430 yards of total offense and a 10 for 16 mark on 3rd down to the Mountaineers in the loss.

My concern here is that Georgia State may not care about winning this one as they’ve pretty much been knocked out of the chance to play for the Sun Belt championship, and they’re already in position for a bowl invitation. However, Idaho mailed it in a while ago, and I think Georgia will want to win this one at home for their seniors, and by a touchdown is reasonable so I'll lay the points with Georgia State here