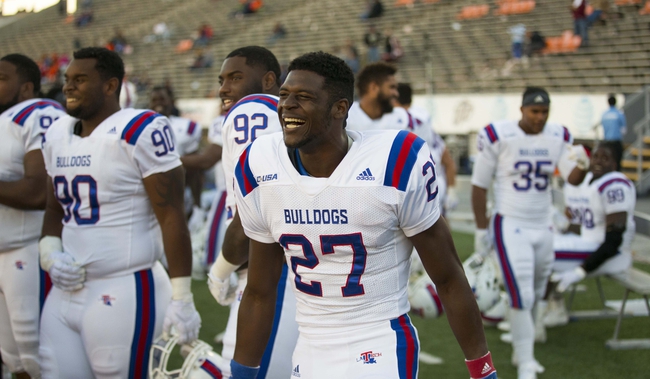 The DXL Frisco Bowl is coming our way on Wednesday, December 20 as the Louisiana Tech Bulldogs meet the SMU Mustangs in college football action from Toyota Stadium.

The Bulldogs come into this one with a 6-6 record overall. Louisiana Tech won their final two games versus UTEP and UTSA to creep back to .500 on the year. In that UTSA game, the Bulldogs’ Boston Scott put up 20 carries for 138 yards and a TD.

On the season, J’Mar Smith has amassed 2758 yards passing with 13 touchdowns and five picks for Louisiana Tech, and Scott leads the way in rushing on 937 yards and eight TDs overall. Teddy Veal is the Bulldogs’ lead receiver with his 832 yards and five touchdowns from 69 catches.

Over on the SMU side, they’re sitting at 7-5 overall. The Mustangs had lost three straight versus UCF, Navy and Memphis, but got a win versus Tulane in their last game. In that one, SMU QB Ben Hicks put up 375 yards, four touchdowns and two INTs.

This year, Hicks has put up 3442 yards with 32 touchdowns and nine picks, and Xavier Jones is the leading Mustangs rusher on 1019 yards and nine TDs. Trey Quinn tops the SMU receiving corps with 1191 yards and 12 TDs from 106 catches.

Things were looking pretty bleak for Louisiana Tech as recently as November 11, as they had lost four of five games. The Bulldogs get credit for storming back, though, and they outscored their opponents 62-27 in their last two outings. Still, they’re going to have a tough time matching up with a capable SMU offense, especially in the passing game. The Mustangs’ top three receivers have a combined 30 touchdowns and 108 catches and will be hard to stop. The line really isn’t too bad so I’m taking SMU for the win and cover here.