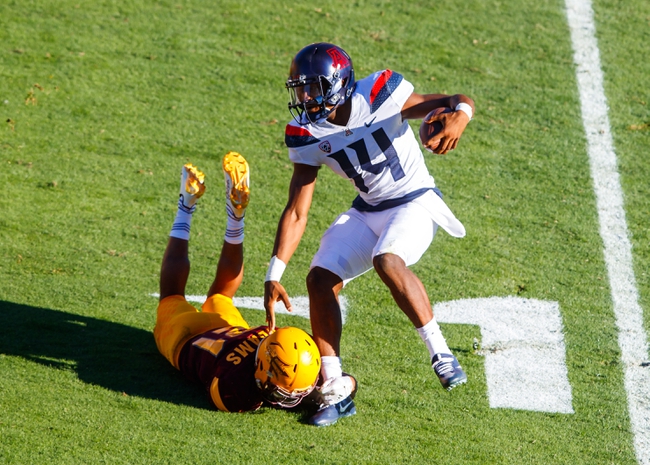 The Arizona Wildcats and the Purdue Boilermakers face off in the Foster Farms Bowl on Fox on Wednesday night.

The Arizona Wildcats got their invite to the Foster Farms Bowl by virtue of their 7-5 record, including a 5-4 mark in Pac-12 play, losing 3 of their last 4 games down the stretch. Khalil Tate was a massive duel threat QB for the Wildcats, throwing for 1,289 yards, 9 touchdowns and 8 interceptions on 94 of 153 passing, a 61.4% completion percentage, while also leading the team in rushing with 1,353 yards and 12 touchdowns. J.J. Taylor added 827 rushing yards and 5 TDs, while Nick Wilson added 585 yards and 6 scores. Shun Brown led the team in receiving with 511 yards and 5 touchdowns with a team-high 39 receptions, while Tony Ellison chipped in 33 grabs for 496 yards and 3 scores. On defense, the Wildcats allowed 467 yards per game, including 276.9 passing yards while allowing 34.1 points per game this season.

The Purdue Boilermakers got to the Foster Farms Bowl thanks to a 6-6 record, including a 4-5 record in Big Ten play, winning 3 of their last 4 games to get back to .500. Elijah Singular threw for 1,703 yards, 14 touchdowns and 6 interceptions on 153 of 275 passing, good for a 55.6% completion percentage. David Blough completed 65% of his 157 pass attempts, with 1,103 passing yards, 9 TDs and 4 picks. Markell Jones led the team with 480 rushing yards, while D.J. Knox added 460 yards and Richie Worship chipped in a team-high 3 rushing touchdowns. Anthony Mahoungou led the team with 560 receiving yards and 6 touchdowns, while Jackson Anthrop led the team with 44 catches for 391 yards and 5 touchdowns. On defence, Purdue gave up 372.3 yards per game, including 133.7 rushing yards against per game while only allowing 19.3 points per game this season.

Purdue’s record is a bit intriguing after finishing just outside the top-15 in points against per game this season. However, the problem for Purdue is that the offense isn’t exactly dominant, and Arizona’s got a strong rushing attack that could break through the stout Purdue defense and chew up lots of clock, so I’ll lay the field goal as I see Arizona taking this one by a touchdown.