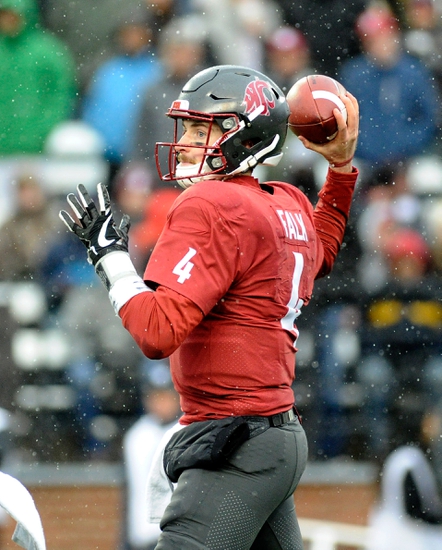 The Washington State Cougars had a successful season after finishing the regular season with a 9-3 overall record and 6-3 conference record. Washington State almost made the Pac-12 Championship game, coming out of the competitive Pac-12 North, however, couldn’t get the necessary win against in-state rival, the Washington Huskies, in the final game of the regular season. On the season, Washington State is averaging 31.4 ppg on 446.4 total yards per game (374.8 passing yds/g; 71.4 rushing yds/g). Offensively, Washington State has been led by QB Luke Falk who completed 66.9% of his passes for 30 TD and 13 INT while averaging 299.4 passing yds/g. The leading receivers for the Cougars has been Tavares Martin Jr. (6.4 rec/g, 75.5 yds/g, 9 TD), Isaiah Johnson-Mack (5.0 rec/g, 46.3 yds/g, 5 TD), Renard Bell (3.0 rec/g, 43.8 yds/g, 3 TD), and Kyle Sweet (4.2 rec/g, 40.1 yds/g, 2 TD). Leading the way for the Washington State backfield has been Jamal Morrow who had 4 TD’s while averaging 43.5 yds/g on 7.2 att/g. Defensively, Washington State is holding their opponents to an average of 24.4 ppg on 313.6 total yards per game (167.4 passing yds/g; 146.2 rushing yds/g). Leading the way for the aggressive Cougars defense has been DL Hercules Mata’afa who led the team with 9.5 sacks. On the season, Washington State forced 27 turnovers, however, still ended up an overall turnover margin of -2.

Washington State and their record setting QB Luke Falk will bring in one of the best offensive passing attacks in the country into this matchup, however, it’s important to not overlook the aggressive and athletic Cougars defense that does a great job forcing turnovers. Michigan State had another solid year led by an efficient offense and a stout defense which ranked 5th in the country against the run. Washington State can sometimes struggle away from home, however, as long as the offensive limits their turnovers, I think they’ll have success putting up points through the air against the Spartans defense and that the Cougars defense does enough to allow Washington State to cover this spread. Take Washington State to cover.