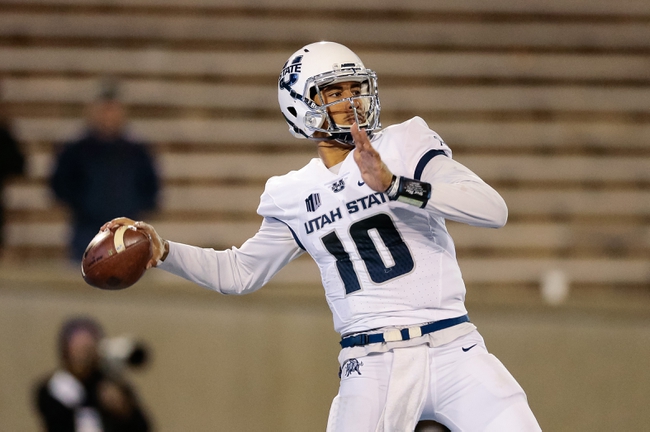 The Utah State Aggies barely achieved Bowl eligibility by winning two of three to end the regular season. Utah State posted middle of the row offensive numbers but were a decent scoring squad at 31 points on 393.8 yards with the #56 rushing attack producing 170 yards per contest. The defense could be called bend but don’t break with 27 points given up on 401.7 yards with the opposition having a great deal of success on the ground with the #117 rushing ‘D’ giving up 220  yards.

Kent Meyers began the year under center for the Aggies and threw for 1,275 yards on 62.8% with Jordan Love (103-189/54.5%) taking the majority of the snaps as the season matured. Utah State did spread the ball around in the passing game with Ron’Quavion Tarver and Dax Raymond leading the receiving corps with a combined 76 receptions for 886 yards. The Aggies ground game gave a lot of players touches and Lajuan Hunt was the top runner with 695 yards on 149 carries.

The New Mexico State Aggies appeared to be heading to the offseason without a Bowl before wins in three of four to end the year salvaged the season. New Mexico State was a top 25 offensive team at 456.5 yards but scored just 29.6 points despite 352.6 passing yards per game. The Aggies defense gave up 30.5 points on 397.7 yards and were generally middle of the row in most defensive categories.

Aggies quarterback Tyler Rogers completed 62.3% of his 500+ passes for 3,825 yards with 26 touchdowns and 16 interceptions. Everybody that wore a New Mexico State uniform had to be alert as Rogers threw the ball in their direction if they were open although Jaleel Scott was the top option with 73 receptions for 1,042 yards. The Aggies didn’t run often but Larry Rose III was the top runner with 792 yards on 170 carries while catching 49 passes for another 474 yards.

Utah State seemed to do a lot with less and New Mexico State did less with more. Utah State defends the pass well but not the run and NMSU doesn’t run so for now I’ll lay the points…