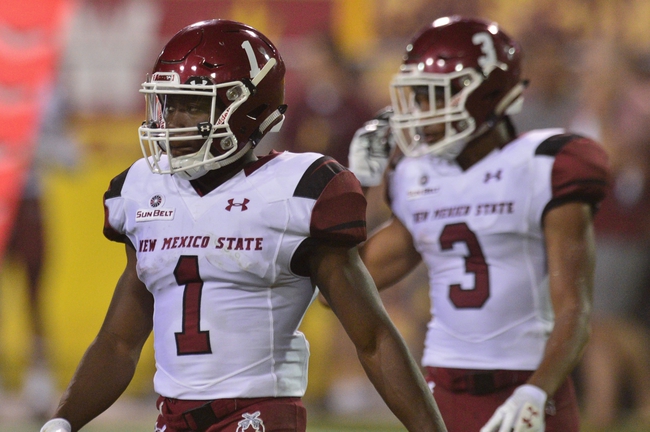 It’s a battle of the Aggies in the Nova Home Loans Arizona Bowl, as New Mexico State takes off against Utah State.

The New Mexico State Aggies got their invite to the Arizona Bowl by virtue of their 6-6 record this season, including a 4-4 mark in Sun Belt play, winning back-to-back games and 4 of 6 to close out the season. Tyler Rogers threw for 3,825 yards, 26 touchdowns and 16 interceptions on 319 of 512 passing, good for a 62.3% completion percentage, while also rushing for 7 touchdowns. Larry Rose III led the team in rushing with 792 yards and 9 touchdowns, while Jaleel Scott led the NMSU receiving corps with 73 catches for 1,042 yards and 8 touchdowns. On defense, New Mexico State allowed 397.7 yards of total offence per game in addition to 30.5 points per game this season, giving up 27 points or more in 9 of their 12 games this season.

The Utah State Aggies were also invited to that Arizona Bowl with a 6-6 record overall and a 4-4 conference record, narrowly missing out on finishing above .500 after a 38-35 loss to Air Force in their regular season finale.Jordan Love threw for 1,380 yards, 8 touchdowns and 6 picks on 103 of 189 passing, while Kent Myers shared the workload with 1,275 yards, 8 TDs and 7 picks. LaJuan Hunt led the team in rushing with 695 yards and 10 touchdowns while Ron’Quavion Tarver led the team in receiving with 40 catches for 472 yards and 7 scores. Dax Raymond also added 36 catches for 414 yards for Utah State this season. Defensively, the Aggies gave up 401.7 yards of total offense per game, finishing in the top-20 in passing yards against per game, allowing just 181.8 yards per game through the air this season.

You have an aerial-based offence in New Mexico State going against one of the better pass defenses in the country in Utah State in this one. With that said, I feel that the bulk of the Mountain West is predicated on a run first mentality, so I’m not reading a whole lot into Utah State’s passing numbers defensively. New Mexico State can hang points on the board in a hurry if you’re not careful, and while I won’t be bold enough to call an outright upset, I think the Aggies have a good shot here, so I’ll take New Mexico State and the points.