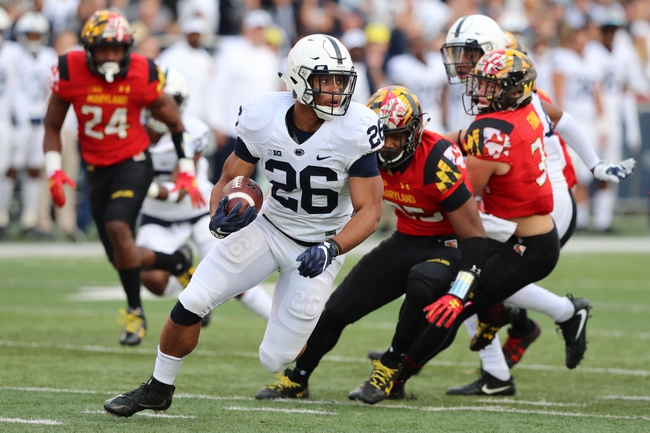 The #11 Washington Huskies and the #9 Penn State Nittany Lions face off in the Fiesta Bowl on ESPN.

The #11 Washington Huskies received their invitation to the Fiesta Bowl thanks to a 10-2 overall record in the regular season, including a 7-2 mark in Pac-12 play, missing out on a berth in the Pac-12 championship after losing a tiebreaker to Stanford. Jake Browning led the team in passing with 2,544 yards, 18 touchdowns and 5 interceptions on 212 of 308 passing, good for a 68.8% completion percentage. Myles Gaskin led the Huskies in rushing with 1,282 yards and 19 touchdowns, while Dante Pettis was the team’s top receiver, leading the way for Washington with 62 catches for 721 yards and 7 touchdowns. The Huskies defense was one of the best in the country, giving up just 278 yards of total offense per game, including just over 97 rushing yards per game, the 2nd-lowest mark in FBS. Washington also held their opposition to 16 points or less in 9 of their 12 games this season, helping play a part in their 14.5 points against per game, the 6th-lowest total in FBS.

The #9 Penn State Nittany Lions got to the Fiesta Bowl by virtue of their own 10-2 finish to the regular season, including a 7-2 mark in Big Ten play, good for the 2nd spot in the Big Ten East division. Trace McSorley threw for 3,228 yards, 26 touchdowns and 8 interceptions on 252 of 386 passing. Saquon Barkley was a dual threat for Penn State this season, racking up 1,134 rushing yards as part of his 2,154 all-purpose yards and 21 all-purpose touchdowns this season. DaeSean Hamilton led the team with 747 yards and 7 touchdowns on 48 receptions, while Juwan Johnson also had 48 catches for 635 yards and Mike Gesicki led the team with 51 catches. Penn State also boasted an extremely tough defensive unit this season, giving up just 15.5 points
per game and 329 yards of total offense per game.

With all of the pro potential going into this game, there are a lot of question marks on both sides, including the status of key pieces like Washington’s Dante Pettis and Penn State’s Saquon Barkley, so I will keep my eye on that. With that said, if both are able to go, I like Penn State here. The Nittany Lions’ two losses came by just a combined 4 points, and they were against two of the best teams in the country, including the game against Ohio State where Penn State choked up the lead late. Washington held their own in the Pac-12 and were stingy against the rush, but no opponent posed the rushing threat like Saquon Barkley, who looked like a Heisman favorite for the majority of the season. Plus, the line is low enough that I think Penn State should be able to win this one and cover in the process.