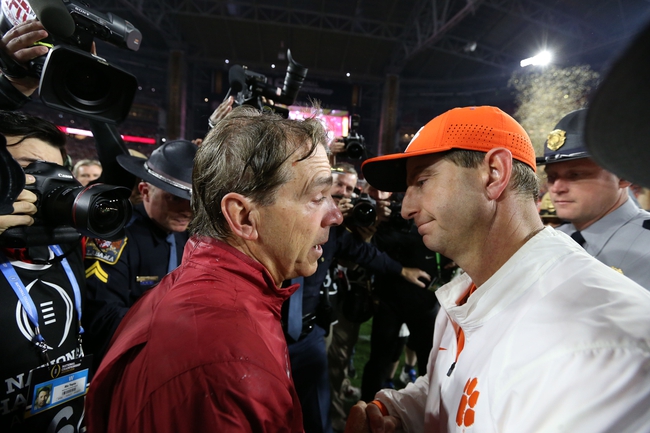 The Alabama Crimson Tide and Clemson Tigers meet Monday in the college football playoffs at the Mercedes-Benz Superdome.

The Clemson Tigers look to win at least 13 games for the third time in school history while reaching a third straight national championship. The Clemson Tigers have won four straight neutral site games. Kelly Bryant is completing 67.4 percent of his passes for 2,678 yards, 13 touchdowns and six interceptions. Bryant has one or less touchdown passes in 10 of his last 13 games. Deon Cain and Hunter Renfrow have combined for 1,230 receiving yards and nine touchdowns while Ray-Ray McCloud has 46 receptions. The Clemson Tigers ground game is averaging 204 yards per contest, and Travis Etienne leads the way with 744 yards and 13 touchdowns. Defensively, Clemson is allowing 12.8 points and 277.9 yards per game. Kendall Joseph leads the Clemson Tigers with 86 tackles, Clelin Ferrell has 8.5 sacks and Trayvon Mullen has three interceptions.

You could make a strong argument that the Alabama Crimson Tide shouldn't even be in this game after struggling down the stretch the way they did and getting outplayed by the Auburn Tigers. Alabama is also still banged up on the defensive side of the ball, something that doesn't help when playing a Clemson offense that's loaded with athletes. The difference for me in this game is Hurts against this Tigers defense. Hurts is simply not a difference maker at the quarterback position, and you need your signal caller to make plays to have success against this nasty Clemson defense. Alabama will not be able to line up and run it with consistent success if plays aren't made through the air. Say what you want about Kelly Bryant, but he has topped 200 passing yards each of his last three games and has combined for six touchdowns during that span, good enough to make defenses respect his ability. In a battle where both teams will have issues moving the ball, I side with Clemson due to the better QB play. I'll take the free field goal but will also be on the ML.