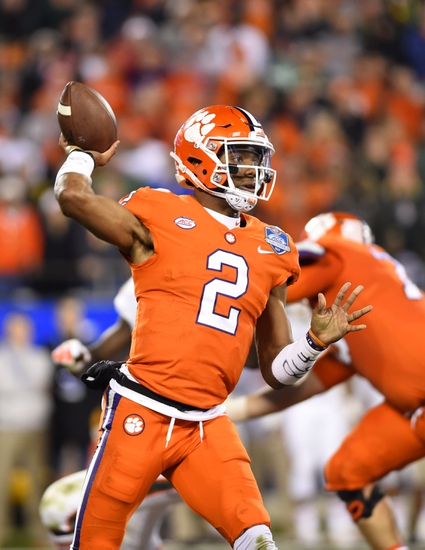 The Sugar Bowl gives us the college football playoff battle between the Clemson Tigers and Alabama Crimson Tide.

The Alabama Crimson Tide have secured yet another berth in the college football playoffs in a rematch of last season’s title game. Alabama continues to be a national title contender because of their ability to score and defend. The Crimson Tide averaged 39 points on 470.8 yards behind the #10 rushing attack that racked up 265 yards per game. The Alabama defense was a shutdown unit that allowed 11.5 points on a mere 260 yards with the third ranked run ‘D’ giving up only 95.2 yards.

Bama quarterback Jalen Hurts completed 136-224 (60.7%) for 2,005 yards with 15 touchdowns and just a single interception. Hurts was the second leading rusher for the Crimson Tide as well with 758 yards on 137 carries and eight scores while Damien Harris topped the team with 906 yards on 110 touches. Calvin Ridley was easily the top Alabama receiver with 55 receptions for 896 yards with next five receivers combining for 57 catches.

The Clemson Tigers will be looking for back to back National Championships when the team opposes Alabama in the college football playoffs with a trip to the championship going to the winner. Clemson was also potent on both sides of the football with the team averaging 35.4 points on 449 yards with the #33 ground game producing 205 yards. The Tigers defense was suffocating with only 12.8 points given up on 228 yards behind the #8 passing defense with the 13th ranked run ‘D’ allowing 112.8 yards.

Clemson quarterback Kelly Bryant was accurate and productive as he completed 67.4% of his 362 throws for 2,678 yards with 13 touchdowns and six interceptions. The Tigers did not lack for receiving options with Deon Cain, Hunter Renfrow and Ray-Ray McCloud combining for 153 receptions and 1,700+ yards. Clemson was explosive on the ground with Travis Etienne posting 744 yards on 103 carries and a hefty 7.2 yard average while Tavien Feaster logged 659 yards on 103 touches for a 6.4 yard average.

This is the third straight matchup between these programs with everything on the line. I simply think Clemson is the better squad and I’ll gladly take the points and hit the ML as well…