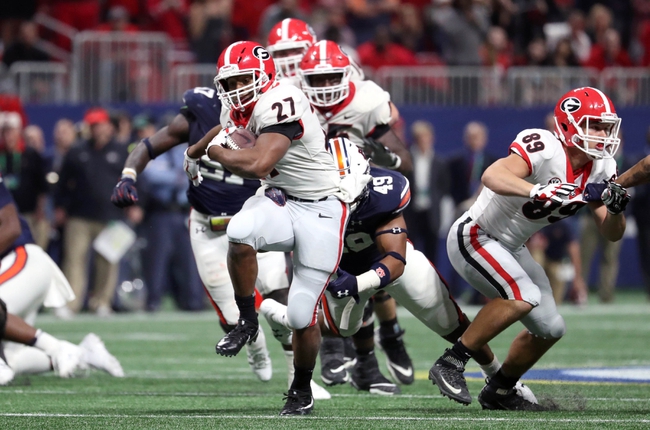 One of the College Football Playoff matchups pits the #3 Georgia Bulldogs against the #2 Oklahoma Sooners in the Rose Bowl on ESPN on New Year's Day.

The #3 Georgia Bulldogs booked their spot in the playoff thanks to an 11-1 regular season record, including an 8-1 record in SEC play, culminating in a 28-7 victory in the SEC championship over Auburn, avenging their only loss of the season from 3 weeks prior. Jake Fromm threw for 2,173 yards, 21 touchdowns and 5 interceptions on 145 of 230 passing, good for a 63% completion percentage. The Bulldogs boasted one of the most lethal ground attacks in all of college football, with Nick Chubb leading the team with 1,175 rushing yards and 13 touchdowns, while Sony Michel added 948 rushing yards and 13 TDs of his own. Javon Wims led the team with 631 yards, 38 catches and 6 touchdowns, while Terry Godwin added 540 yards and 6 TDs of his own. Georgia posed one of the toughest defensive units in the country, holding their opponents to 19 points or less in all but 2 of their 12 games this season, helping the Bulldogs hold their opponents to just 13.2 points per game this season. Georgia also gave up just over 270 yards of total offense per game, the 4th-lowest mark in the country in addition to just over 158 yards passing per game this season.

The #2 Oklahoma Sooners booked their spot in the playoffs after posting a 12-1 record this season, including an 8-1 Big 12 conference record culminating in a 41-17 win over TCU in the conference championship. Heisman finalist Baker Mayfield threw for 4,340 yards, 41 touchdowns and 5 interceptions on 262 of 369 passing, good for a 71% completion percentage. Rodney Anderson led the Sooners with 960 rushing yards and 11 touchdowns while Trey Semon added 710 rushing yards and 5 touchdowns and the aforementioned Mayfield added 5 rushing scores of his own. Marquise Brown led the team with 981 receiving yards to go along with 6 touchdowns and 49 receptions, while Mark Andrews caught a team-high 58 passes for 906 yards and a team-leading 8 TDs. CeeDee Lamb also chipped in 741 receiving yards and 7 touchdowns. All of this while the Sooners led FBS with 583.3 yards of total offense per game, including 367.4 passing yards (3rd-most) and 44.9 points per game (4th-most). Defense wasn’t necessarily the strongest suit for Oklahoma, but the Sooners were decent defensively, giving up just 25 points per game and 384 yards of total offense per game this season.

Normally for a bowl game with this much pro potential, I’d be concerned about players resting up for the NFL combine. However, with this being for a spot in the National Championship, I’m expecting all hands on deck. With that said, the Sooners will have their hands full trying to break down the Georgia secondary. Even in their loss to Auburn, the Bulldogs still held Jarrett Stidham to just 214 passing yards, but the 3 touchdowns were mostly done on a short field. The bulk of Auburn’s damage was done on the ground, and Oklahoma’s strength is their passing, not their ground attack. Plus, the Sooners gave up 38 or more points in 5 of their last 9 games of the season. I think if Georgia can get on the board early, the Bulldogs may be able to do enough defensively to control the game, which I think they will so I’ll lay the points with Georgia here.