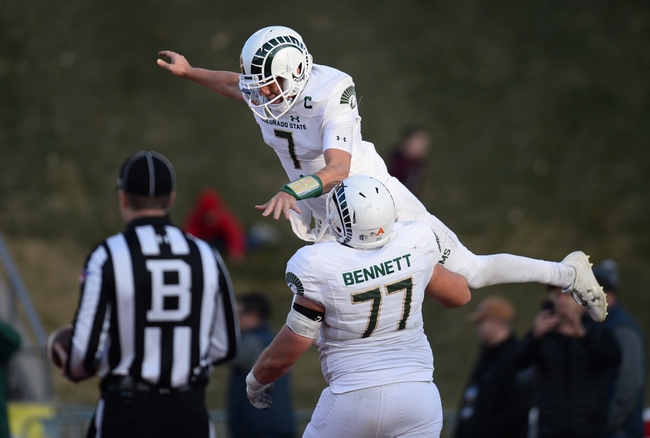 Coming up on Saturday, August 25 out at Sonny Lubick Field at Hughes Stadium, we’ve got college football action between the Hawaii Rainbow Warriors and the Colorado State Rams.

Hawaii has plenty of room for improvement this season following a meager 2017. Last year, the Warriors finished 3-9 and 1-7 in the Mountain West Conference, which resulted in a tie for fifth place in the West Division.

This season, we’ll be seeing Cole McDonald under center for the Warriors. In limited action last season, McDonald posted a 5-for-9 line with 22 yards and a TD. The hole behind center will be significant without Dru Brown, however,

As for the Rams, they’re coming off a 7-6 season, going 5-3 in the Mountain West. Colorado State was invited to the New Mexico Bowl to face off against Marshall, and the Rams ended up losing 31-28, a respectable outcome considering they were behind 31-14 in the fourth quarter.

Colorado enters this season under fourth-year head coach Mike Bobo, and he’s got a handful of talented players to work with. With QB Nick Stevens gone, we’ll be seeing throws from KJ Carta-Samuels and Justice McCoy, not to mention returning RB Izzy Matthews.

By most measurements, neither of these teams has performed too well against the spread. This might be a good spot to look at the over/under, as Hawaii tends to participate in lower-scoring games. The under is 4-0 in the Warriors’ last four road games and 6-0 in their last six conference games. I’m going with Hawaii for the cover on a pretty thick line but the under looks pretty darn good as well.