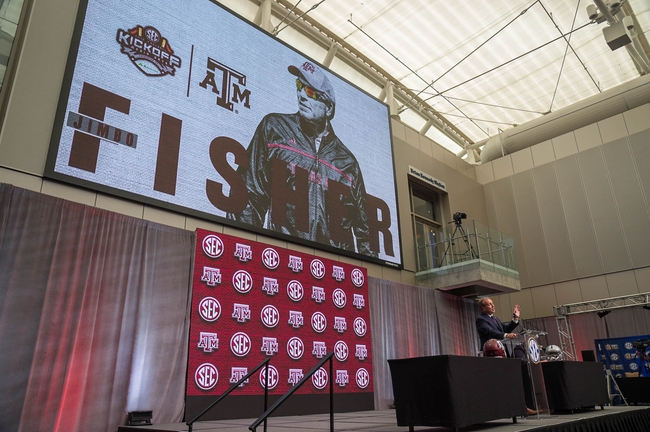 We have some opening week college football action as the Northwestern State Demons take on the Texas A&M Aggies from Kyle Field in College Station, Texas.

The Northwestern State Demons come into the 2018 season representing the Southland conference in the NCAA FCS, after finishing the 2017 campaign 4-7 with their lone game against an FBS opponent ending in a 52-24 loss to the Louisiana Tech Bulldogs in their opening matchup last season. The Demons’ leading passer, Clay Holgorsen, who threw for 1,240 yards and 9 touchdowns last year returns for his senior year while leading rusher Chris Jones graduated from the program after racking up 786 yards and 5 touchdowns last year. Jared West picked up 5 TDs as well and returns for his junior year and is expected to get the start at running back. The Demons also return their leaders in the receiving corps with Jaylen Watson and Marquisian Chapman who combined for 7 receiving touchdowns last season.

The Texas A&M Aggies enter their first season in the Jimbo Fisher era as the Aggies put pen to paper with the former FSU coach on a ten-year, $75 million contract after last season’s disappointing 7-6 record that saw the Aggies start the year with a frustrating 1 point loss to UCLA that saw the Aggies blow a 38-10 half time lead resulting in a 45-44 UCLA victory. The Aggies lost 5 of 8 down the stretch after starting the year 4-1, finishing the year with a 55-52 loss to Wake Forest in the Belk Bowl. Kellen Bond and Nick Starkel will duke it out for the starting QB job once again, Trayveon Williams anchors the Aggie backfield after racking up 990 all-purpose yards last season. A&M lost leading receiver Christian Kirk to the NFL draft, but still have a solid leader to their receiving corps in Jhamon Austin who hauled in 50 balls for 571 yards and 3 TDs last season. The Aggies’ defense that finished 2nd in the country in sacks behind only the Miami Hurricanes, have a solid pair of linebackers in Otaro Alaka and Tyrel Dodson. The key for the A&M defense will be stopping the big play through the air as the Aggies held just five opponents last year to under 200 yards passing in a game, with two being Alabama and Florida, impressive teams, but not ones that rely much on the pass.

This is a lot of points to lay, and it’s scary as the Aggies beat Nicholls State by just 10 points last season as a 37.5 point favorite, but that game was after the heartbreaking loss to UCLA so I’m chalking that up to a hangover. As much as I’d like to give Northwestern State a shot in this one, the fact is that the Aggies are miles ahead of the Demons, and this Aggies team will want to start the Jimbo Fisher era in College Station on a high note. Northwestern State struggled against FCS opposition last season, and Texas A&M have a lot of guys jostling for playing time and spots in the depth chart which usually results in guys taking their play up a level or two. I see this one getting ugly in a hurry so I’ll lay the points with the Aggies to start the year with a bang.