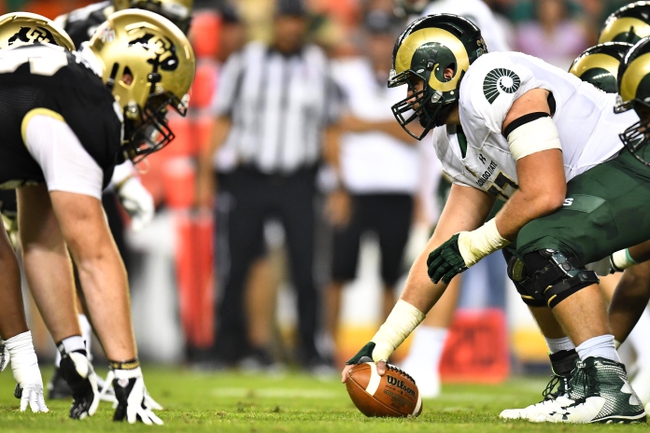 We have some opening week college football action as Colorado pays a visit to Colorado State in in-state rivalry action.

The Colorado Buffaloes come into the 2018 campaign looking to bounce back from a disappointing 5-7 mark in 2017 after winning the Pac-12 South the year before, the lone winning season since the Buffs made it to the conference title game as part of the Big 12 conference in 2005. Steven Montez returns to take over the duties under centre for Colorado after throwing for just under 3,000 yards and 18 touchdowns last season. The Buffs also lost three of their four running backs from last season’s squad, pushing Beau Bisharat into the light at the top running back slot. The big question mark for the Colorado offense is the offensive line, who will have to improve after allowing 39 sacks last season. Defensively, the Buffaloes have a lot to work on if they’re going to contend in the Pac-12 this season, and it starts up front. The Buffaloes have to record more than 19 sacks last season, 10 of which came against Texas State and Cal, a pair of teams who really aren’t intimidating anybody when appearing on their schedule. The Colorado defence also has to force more turnovers after logging just 14 in the entire season, half of which came in weeks 1-3, against Colorado State (again), Texas State and Northern Colorado. Only time will tell if Colorado can regain form of the past and if Montez can carry the Buffaloes back to bowl season.

The Colorado State Rams are in a complete rebuild mode a year removed from finishing the 2017 campaign with a 7-6 record, including a 31-28 loss to Marshall in the New Mexico Bowl. The Rams are moving forward without three of their offensive mainstays over the last couple of seasons, including Nick Stevens who threw for over 8,500 yards and a Colorado State record 70 touchdowns over the last three seasons. The Rams also lost the services of receiver Michael Gallup who logged just under 2,700 yards over two seasons and running back Dalyn Dawkins who recorded just under 3,200 rushing yards in his career in a Rams uniform. K.J. Carta-Samuels is expected to handle the reins under centre for the Rams as a graduate transfer from Washington. The Rams still have a ton of options offensively, with Olabisi Johnson at receiver who has 69 receptions for over 1,200 yards and 6 touchdowns over the last two years. Izzy Matthews has logged over 1,900 career rushing yards and 26 career touchdowns over the past three years. Defensively, the Rams defense is being rebuilt by new defensive co-ordinator John Jancek, who will be tasked with turning around the Mountain West Conference’s worst defense last season, which allowed 431.6 yards per game last season. Two key pieces to that return to this year’s squad in linebacker Josh Watson and safety Jordan Fogal, who were the top two in tackles on Colorado State last season. Only time will tell if Colorado State can take a step back in the right direction, but a tough schedule early on with games against Arkansas and Florida in addition to this game, could make this a harder road to come back from.

These rivalry games can be hard to predict from time to time, but I think this is one of the easier ones. The Rams, while having some talent, are in a complete rebuild offensively and need to show they’ve improved on defense before I can install any trust in them along with the fact that the Rams have been brutal ATS dating back to last season. Colorado has the edge at QB with Montez and have fared well ATS in this matchup, so I’ll lay the points with the Buffaloes in this spot.