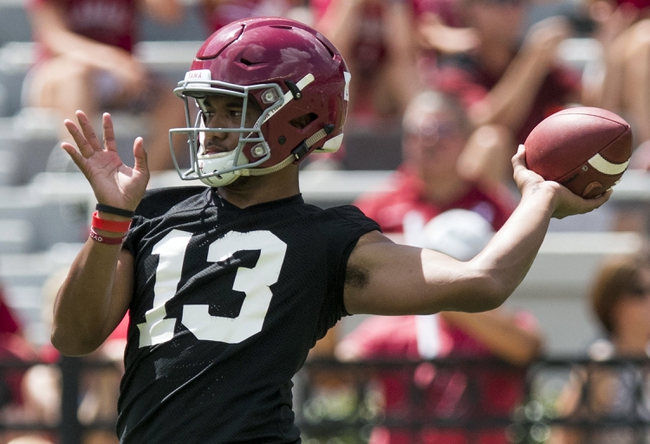 We have an intriguing college football matchup from Camping World Stadium in Orlando, Florida as the Louisville Cardinals take on the Alabama Crimson Tide.

The Louisville Cardinals come into this season with a cloud of uncertainty over the team, one year removed after finishing with an 8-5 overall record, including a 4-4 mark in ACC play, good enough to finish in a three way tie for 3rd place with a berth in the TaxSlayer Bowl, where the Cardinals lost 31-27 to Mississippi State. The biggest loss for the Cardinals from last season is obviously Lamar Jackson, as the former heisman winner went pro to the Baltimore Ravens in the NFL draft. Jawon Pass is the heir to the Cardinals offense under center, with one of the ACC’s best groups of receivers with the likes of Jalyen Smith, Dez Fitzpatrick and Seth Dawkins with Louisville’s top four receivers returning this season. The biggest question mark for Louisville offensively will be the ground game, as Pass isn’t the scramble type of quarterback that Jackson was and the top three rushers for the Cardinals are gone after combining for 2,700 yards and 29 touchdowns last year. Dee Williams is the most likely candidate to lead Louisville at running back, mainly due to his experience, but there is still some uncertainty regarding his health after knee problems last season and a foot issue over the winter. On defense, the Cardinals have to do better than the 10th ranked defense in the ACC and have to replace a pair of key pieces in the secondary and two of their top three tacklers from last season in doing so. Dorian Etheridge, Jon Greenard and London Iakopo will have to anchor the Cardinals’ defense from the linebacker position as well.

The Alabama Crimson Tide will look to pick up right where they left off last season, finishing 13-1, including a 7-1 mark in SEC play and a spot in the national playoff. Bama took down Clemson 24-6 in the Sugar Bowl / national semifinal, before defeating Georgia for the national championship by a final score of 26-23 in a thrilling overtime affair. Mike Locksley steps in as Alabama’s new offensive coordinator, a year removed from a Crimson Tide offense that averaged 444 yards and 37 points per game last season. And the scary thing is, this year’s offense looks like it can be even better. The quarterback situation is for a lack of a better word murky, with Tua Tagovailoa being the better and more accurate arm, while Jalen Hurts is the more athletic and versatile of the two. Whoever starts under centre will have a plethora of options to throw to, with the likes of Jerry Judy, Henry Ruggs, Irv Smith and Hale Hentges among others. The monster that is the Alabama backfield is just as scary, with Damien Harris and Najee Harris expected to continue where they left off last season, with Najee finishing the year strong while Damien racked up 1,000 yards and 11 touchdowns. On defense, Alabama lost eight starters from last year’s squad, but if there’s one program that just pushes through no matter what, and succeeds, it’s the Tide. Alabama led the country with just 280 yards against per game and 11.9 points against per game last season and while the defense may take a couple games to click we can rest assured that Alabama will be up to their usual tricks come November and December.

While it may seem that I am all over Alabama in this one after singing their praises earlier in this post, I would slow down. Sure, Alabama is the reigning champion, one of the best teams in the country and will probably be in the national playoffs once again. However, Alabama’s defense, as good as it may be, still has some holes that need to be filled and addressed, and if last year was any indication, it’s that it takes a couple games for this team to fully get motivated and start gelling. The Tide played down to the likes of Colorado State last season and allowed the Rams to hang around and cover, and while the Cardinals are missing pieces, I think there’s still enough talent offensively for Louisville to hang around here. I’m not saying the Cardinals win this one outright, but something seems off about leaving nearly four touchdowns on the table so I’ll take a shot with Louisville and the points here.