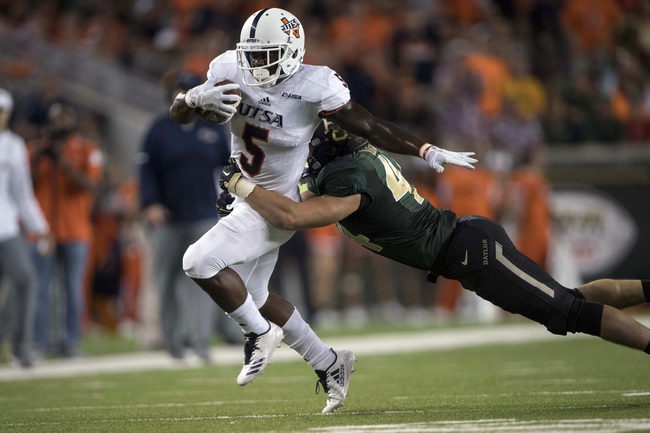 The UTSA Road Runners will travel to Sun Devil Stadium to take on the Arizona State Sun Devils this upcoming Saturday night in College Football action.

The UTSA Roadrunners struggled down the stretch last season, losing 3 of their last 4 games, however, still had a winning season as they finished their year with a 6-5 (3-5 C-USA) overall record. Offensively, it was a tough season for the Roadrunners as they finished the season averaging just 23.5 ppg on 387.4 total yards per game (184.6 rushing yds/g; 202.8 passing yds/g). The offense will look quite different this season as the Roadrunners return just 3 offensive starters from last year’s squad. Despite the trouble putting points on the board, the Roadrunners had a solid rushing attack which should be the main offensive weapon for them again this season as RB Jalen Rhodes (12.2 att/g; 59.9 yds/g; 5TD) will lead the backfield. UTSA has yet to name a starting quarterback however, it looks like the race will come down to two transfers in Cordale Grundy and D.J. Gillins. The Roadrunners will hope that WR’s Greg Campbell Jr. (2.7 rec/g; 29.5 yds/g) and WR Marquez McNair (1.8 rec/g; 19.7 yds/g; 2 TD) can produce more in starting roles this season. Defensively, the Roadrunners we’re very tough last season as they held their opponents to an average of just 17.0 ppg on 287.8 total yards per game (127.7 rushing yds/g; 160.1 passing yds/g). UTSA will be returning 5 starters including three starters on the defensive line in Baylen Baker, Kevin Strong Jr., and Josiah Tauaefa.

The Arizona State Sun Devils had an up and down season last year and finished their 2017 campaign with a 7-6 (6-3 Pac-12) overall record. Arizona State pulled of some solid upsets last season, highlighted by a 13-7 victory over Washington, however, couldn’t pull of a victory in the Sun Bowl as they fell to NC State by a 52-31 margin. Arizona State will have some new energy on team as Herm Edwards is making his comeback into coaching. Offensively, Arizona State is returning 7 starters from a team that averaged 31.8 ppg on 431.2 total yards per game (175.5 rushing yds/g; 255.7 passing yds/g). Leading the for the offense will be QB Manny Wilkins who completed 63.4% of his passes with 20 TD’s & 8 INT while averaging 251.5 passing yds/g. Wilkins also can be trouble in the rushing attack as he also scored 7 rushing TD’s. The Sun Devils lost their top two rushers in Demario Richard and Kalen Ballage and will hope that sophomore get pick up that lost production after coming off a season in which he had a TD and had 142 yards in 23 attempts. The Sun Devils will have some weapons back at the receiver position as both N’Keal Harry (6.3 rec/g; 87.8 yds/g; 8 TD) and Kyle Williams (5.1 rec/g; 58.7 yds/g; 7 TD). Defensively, Arizona State allowed their opponents to average 32.8 ppg on 449.7 total yards per game (174.8 rushing yds/g; 274.9 passing yds/g). The Sun Devils will return 4 starters on the defensive end and will be led this season by DL Koron Crump.

UTSA is a very solid defensive squad however and although they do have some question marks on the offensive end, they could be a dangerous team in the C-USA. Arizona State has some solid offensive players returning for Herm Edwards, however, the overall talent doesn’t seem at this point will be enough for them to compete in the PAC-12 South. This is a tough one to call, however, UTSA won’t be intimidated by going into Arizona State after they upset Baylor on the road to start their season last year and as I think the Roadrunners defense will give the Sun Devils some trouble, I’m taking UTSA and the points in this one.