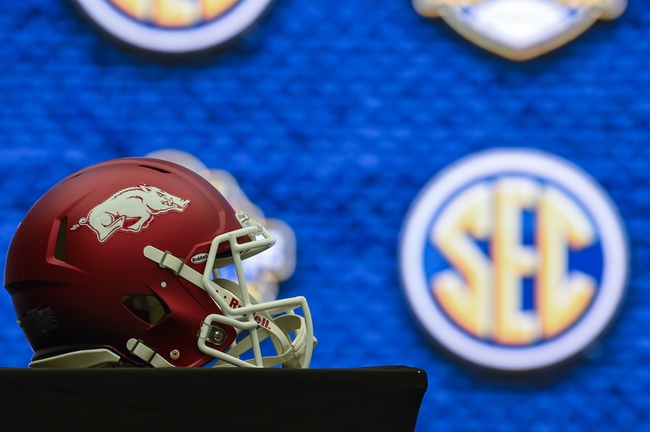 We have some opening week college football action from Donald W. Reynolds Razorback Stadium as the Eastern Illinois Panthers take on the Arkansas Razorbacks.

The Eastern Illinois Panthers will look to make some noise in the 2018 FCS season after finishing 2017 with a 6-5 overall record including a 5-3 mark in Ohio Valley Conference play. The Panthers started the year with tons of promise at 5-2, but lost 3 of 4 to finish the year out of the playoff picture. Scott Gilkey is back to lead the Panther offense under center after throwing for 606 yards and 3 TDs last season while also rushing for 274 yards and 6 touchdowns on the ground. Alex Hollins and Aaron Gooch are back to lead EIU’s receiving corps after combining for 90 catches and 1,055 yards and 7 TDs last season while Isaiah Johnson is back as the Panthers’ lead running back after racking up 683 yards and 5 TDs last season.

Arkansas on the other hand will be looking to bounce back after a disappointing 2017 campaign that saw the Hogs finish 4-8 including a 1-7 record in SEC play to finish in the basement of the SEC West division, resulting in the firing of head coach Bret Bielema. Austin Allen is no longer with the program, so that leaves the keys to new head coach Joe Craddock’s offense to Cole Kelley, who threw for 1,038 yards and 8 touchdowns on 57.6% passing last season. Devwah Whaley led the Hogs with 127 carries last season, racking up 559 yards and 7 touchdowns. 12 of Arkansas’ top 13 receivers from last season are back, including Jonathan Nance who led Arkansas with 37 catches, 539 yards and 5 receiving touchdowns last season. Defensively, John Chavis takes over the Arkansas D after helping the Texas A&M Aggies rack up 43 sacks and 89 tackles for a loss last season, the same departments that Arkansas finished last in the conference in last season with just 19 sacks and 48 tackles for a loss.

This is a ton of points to lay with an Arkansas team that has a lot to prove after being an utter disappointment last season. However, this is a similar team to the one that Eastern Illinois put out last season, and the Panthers were beat down 38-10 in their only appearance against an FBS opponent last season and were flattened by some pretty good FCS teams, both of whom Arkansas are better than in my opinion. I think the Hogs can use this as a statement game to set the tone for this season, so I’ll lay the points with Arkansas here.