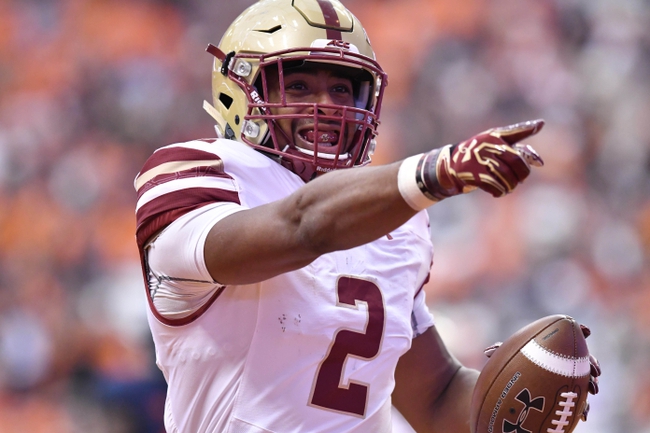 The UMass Minutemen visit the Boston College Eagles in college football action on September 1 at BC Alumni Stadium.

UMass is coming off something of a disappointing campaign in their second year as an independent in 2017. The Minutemen finished 4-8, but after opening the season with six straight losses they finished 4-2 across their final six outings.

The Minutemen just played their opening game against Duquesne on August 25, and cruised to a rousing win 63-15. UMass QB Andrew Ford logged a nice 13-of-19 line for 186 yards ant two TDs, while Bilal Ally added 109 yards and a score on the ground.

Over on the Boston College side, they’re fresh off a 7-6 mark in 2017, where they went 4-4 in ACC play. That left the Eagles in a three-way tie for third place in the Atlantic Division. The season ended with a trip to the Pinstripe Bowl, but unfortunately Boston College fell to Iowa in that one.

Anthony Brown will be taking the snaps once again as the starting QB for the Eagles. Brown is coming off 1367 pass yards with 11 TDs and nine picks. AJ Dillon figures to have a big impact on the Eagles’ offense once again; he managed 1589 yards on 300 carries with 14 rush touchdowns.

At first glance, the line on this one seems to be pretty thick. However, if you consider the added familiarity of another year in the system, plus several key players slotting back in for the Eagles, it makes sense. Thus, I’m not going to overthink this one; Boston College is simply a better team. All of that said, with such a thick line I’m going UMass here.