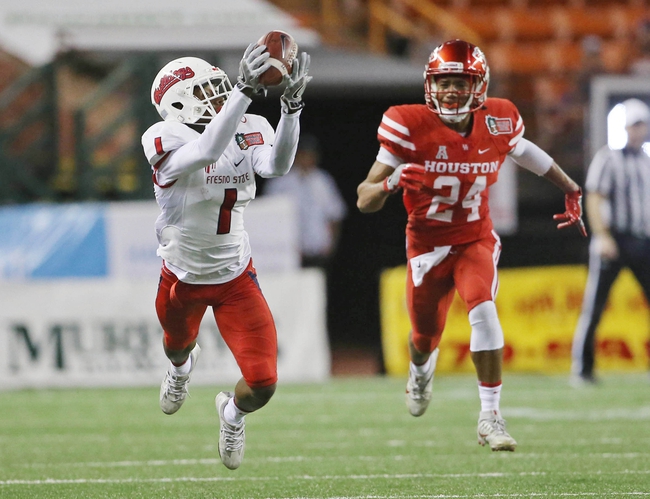 We have some opening week college football action from Bulldog Stadium in Fresno, California as the Idaho Vandals take on the Fresno State Bulldogs.

The Idaho Vandals begin their newest stint in the FCS after dropping down from the FBS and the Sun Belt conference last season, finishing last season with a 4-8 record, including a 3-5 mark in Sun Belt play. Colton Richardson and Mason Petrino will be expected to battle for the starting QB job throughout September with the loss of last year’s starting pivot Matt Linehan following his graduation from the program. The issue for Petrino and Richardson is that the Vandals also lost three of their top four receivers from last season, leading David Ungerer to shoulder the load after catching 39 passes for 432 yards and 6 touchdowns last season. Isaiah Saunders is back at running back after racking up 506 yards and a pair of touchdowns last season, but a drop-off in production may result in the stepping up of guys like Dylan Thigpen, a highly-touted recruit in the Vandals’ system. Kaden Elliss returns to anchor the Idaho defense at linebacker after finishing second in the Sun Belt with 16 tackles for a loss, 6 sacks and a pair of forced fumbles last season. Ed Hall will be beside Elliss at linebacker while Jalen Hoover, Sedrick Thomas and Lloyd Hightower make up an extremely tough Vandals’ secondary. The Vandals handily took care of one of the FCS’ best last season in Sacramento State, so only time will tell if the Vandals’ drop down can lead to a Big Sky title and a playoff berth at the end of the season.

The Fresno State Bulldogs will be looking to build on what many would consider a successful 2017 season, finishing the year 9-4, including a 7-1 mark in Mountain West conference play to finish at the top of the West division and earning a spot in the conference title game, narrowly losing to Boise State by a final score of 17-14. The 10th win of the season came in the Hawaii Bowl over Houston, making the Bulldogs just the second team in history to win 10 games the following season after losing 10 games after they finished 1-11 in 2016. Marcus McMaryion is back under center for Fresno State after throwing for 2,726 yards and 14 touchdowns on 62.1% passing last season. Jordan Mims and Josh Hokit return in the Bulldog backfield after combining for over 1,200 yards and 13 touchdowns on the ground last season, while KeeSean Johnson is back as the Bulldogs’ top receiving threat after hauling in 77 passes last season and Jamire Jordan who averaged 21 yards per catch last season. Defensively, the majority of the defense that was 15th in the country in total offense against and 10th in scoring against with 321 yards and 18 points per game respectively is back, including leading tackler, Jeffrey Allison, who racked up 126 tackles last season. The Bulldogs’ secondary remains entirely in tact, with Mike Bell and Juju Hughes returning at safety after combining for 148 tackles and two interceptions last season. The Bulldogs were solid last season, but all the pieces are there for Fresno State to be even better.

We will update with trends if/when they’re released.

The Vandals may have made a smart move in their eyes dropping to the FCS, but I still think Idaho had enough to hold their own in the FBS this season. With that said, I still think Idaho is in way over their heads here. The Bulldogs were one of the most underrated teams in the country last season, and while they gave up 89 points to Alabama and Washington, they didn’t allow more than 27 points to any other opponent and held their opposition to 21 points or less 10 times last season. All in all, I think Fresno State’s experience and talent will be too much for Idaho to handle here which is why I’ll lay the points with the Bulldogs here.