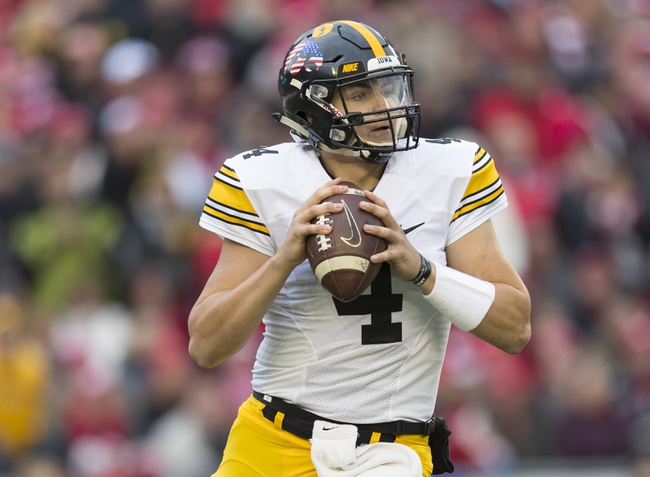 The Northern Illinois Huskies have made a bowl appearance in five of the six years under coach Rod Carey, and they have a team that should once again compete for a MAC title. Marcus Childers returns at quarterback after throwing for 16 touchdowns and rushing for nearly 500 yards as a freshman. All five offensive linemen return for NIU and there’s experience at wide receiver with Spencer Tears and D.J. Brown coming back for another season. Defense, however, is the one thing that separates Northern Illinois from the rest of the MAC, and it will remain that way with Sutton Smith returning for his senior season, as he had 30 tackles for loss and 14 sacks last season. Antonio Jones-Davis is one of the better linebackers in the conference and Albert Smalls is a cornerback with a skill set for the next level. The Northern Illinois Huskies are as balanced as any team in its conference and would love to set the tone for the season with a monster road victory.

The Iowa Hawkeyes have made a bowl game in each of the last five seasons and enter this year as a Big Ten contender. Iowa has its quarterback in Nathan Stanley, who threw for 26 touchdowns last season and is capable of so much more if he can improve his completion percentage in his second full year. Noah Fant is one of the top tight ends in the country and Nick Easley returns after leading the team with 51 receptions. Iowa does have some questions at running back and along the offensive line, but those are two areas this program usually figures things out each year. Iowa lost a ton of production on the defensive side of the ball, but A.J. Epenesa flashed serious potential last season and could quickly become one of the better defensive ends in this conference. Defensive back Amani Hooker was also solid in his first full season and will become the face of a secondary that has a lot of new faces. The Iowa Hawkeyes have questions in areas they’re usually extremely solid in, but there’s enough here to make a run for the Big Ten Championship.

The Iowa Hawkeyes are banged up on both lines and already entered the season with some question marks. The Northern Illinois Huskies are one of the few teams from the MAC that actually plays defense an has an experienced offense that can consistently move the football. This is a dangerous, dangerous game for the Hawkeyes. With that said, Iowa is the much more physical team in the trenches and I question if NIU is ready for that type of smashmouth style football. The Huskies are fine playing against other MAC teams, but Iowa and its country strong, big boy football is a whole different ball game. I have the feeling that NIU could just get manhandled. I'm taking the Hawkeyes by double digits.