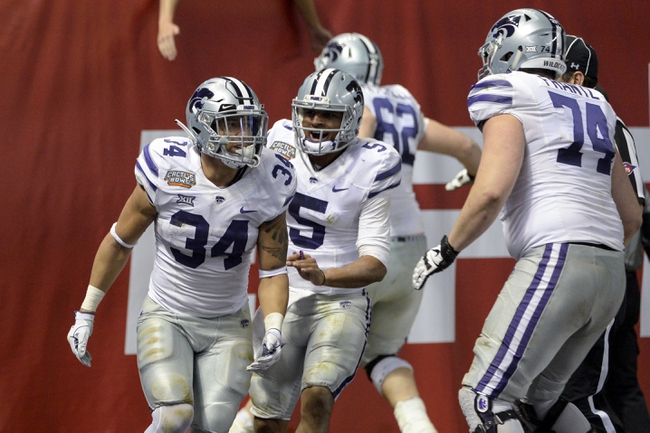 The South Dakota Coyotes are coming off an eight-win season and did go on the road last year and beat Bowling Green. Austin Simmons is likely going to takeover at quarterback after throwing for four touchdowns on 28 pass attempts, while Michael Fredrick returns at running back after 705 rushing yards and seven touchdowns. The Coyotes also return their top two wide receivers, so while missing Chris Streveler at quarterback is a big blow to this offense, South Dakota should be just fine in terms of moving the football. Defensively, South Dakotaa returns five of its top six tacklers from last season, including Andrew Gray, who led the team with 89 tackles and Phillip Powell, who had three interceptions and five pass deflections. The South Dakota Coyotes are a combined 7-13 SU in their last 20 road games.

The Kansas State Wildcats have made a bowl appearance in each of the last eight seasons and give themselves a chance each week with Bill Snyder leading the way at head coach. Kansas State is loaded at running back with Alex Barnes, who is a candidate for a 1,000 rushing yards and all five starters return along the offensive line. If Alex Delton or Skylar Thompson can separate themselves at quarterback, KSU will have quite a balanced offense capable of hanging in the competitive Big 12. Defensively, Kansas State is missing a ton of key players from a year ago, but the youth and athleticism should help. Denzel Goolsby is back as the teams third leading tackler and defensive end Kyle Ball flashed serious potential at defensive end. The Kansas State Wildcats have won three of their last four season openers.

The South Dakota Coyotes beat Bowling Green on the road last year and racked up wins over some of the better FCS teams in the country. The Coyotes won't be scared of the bright lights and will probably enter this game feeling like they have a chance to win. I'm a sucker for the Kansas State Wildcats and coach Snyder, as the team is extremely well coached and is usually money whenever getting points. The problem is KSU does have inconsistent play at quarterback and this is a bit of a lookahead game with Miss State on deck next week. Not to mention the South Dakota Coyotes can play some football. I'll take a shot with the points.