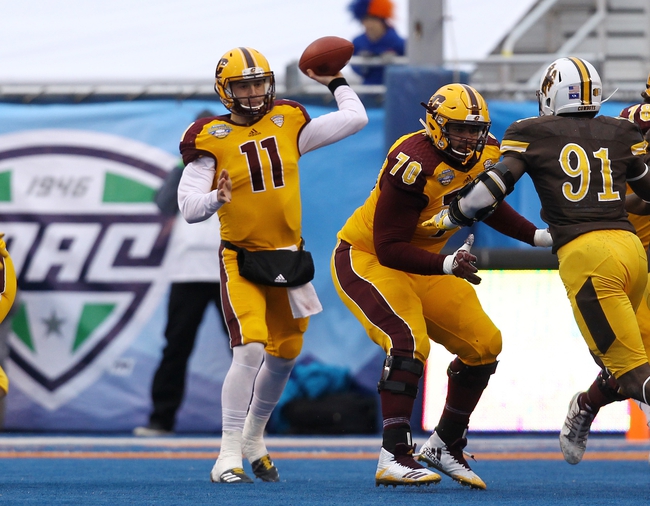 We have opening week college football action from Kroger Field in Lexington, Kentucky, as the Central Michigan Chippewas take on the Kentucky Wildcats.

The Central Michigan Chippewas come into the 2018 campaign after a 2017 season that saw the Chippewas finish 8-5, including 6-2 in MAC play to finish in a tie for 2nd in the MAC West division, which was enough to get Central Michigan an invite to the Famous Idaho Potato Bowl, a game in which the Chippewas were taken down by Wyoming by a final score of 37-14. The Chips’ offense averaged just under 400 yards and 28.5 points per game last season, but have to improve on that without their starting quarterback and their top four pass catchers from last season. The Chippewas do return Jonathan Ward at starting running back, after rushing for 1,024 yards and 10 touchdowns last season. Defensively, CMU finished in the top half of the conference, struggling to defend the ground attack but led the conference in pass defense and 3rd in the country in turnovers forced. The problem is that Central Michigan loses 14 of their 35 sacks from last season after losing Joe Ostman, but Malik Fountain is back after leading the team in tackles last season.

The Kentucky Wildcats will look to build on a decent 2017 campaign of their own, finishing 7-6 with a 4-4 mark in SEC play to finish in a tie for 3rd in the SEC East, earning a spot in the Music City Bowl, a game that Kentucky narrowly lost by a final score of 24-23 to Northwestern. Kentucky lost their top two quarterbacks after Stephen Johnson and Drew Barker finished their time with the program. Terry Wilson and Gunner Hoak will be in a quarterback battle for the time being, and it won’t be much easier for either one to improve a passing game that finished near the bottom of the conference after Kentucky lost four of their top five receivers from last season as well. On the plus side, Benny Snell is back after rushing for 1,333 yards and 19 touchdowns last season and C.J. Conrad is back as the top receiver from last year’s squad. Defensively, the bulk of the Wildcats core is back, with 10 starters back for this season. Kentucky’s pass rush will hope to improve after recording 30 sacks last season but finishing second to last in the conference in TFLs last season. The Wildcats’ defense struggled all around, owning the 2nd-worst pass defense in the conference, allowing 200 or more passing yards in all but two games, and the two outliers were against run-heavy teams like Georgia and Mississippi State.

If we are being honest, I have no clue why this line is as big as it is. Sure, Kentucky is in a tougher conference, but they’ve lost just as much on the offensive end as Central Michigan has. Both teams have a solid running back to lead the way, and both will have their growing pains in regards to the aerial attack. All in all, I think these two teams are more evenly matched than the line would suggest, so I’ll take Central Michigan and the points here.